I received a call at the intervening hours of 15 and 16 May from an unknown number. Nursing a severe headache, I was desperately trying to sleep after taking a couple of paracetamols. Soon that call from an unknown number was followed by a short text message, which read, “I’m xxxxxxxxx, please call.” The message was from a senior member of Congress President Rahul Gandhi’s core team. Despite my headache, I could not resist my temptation to call back. 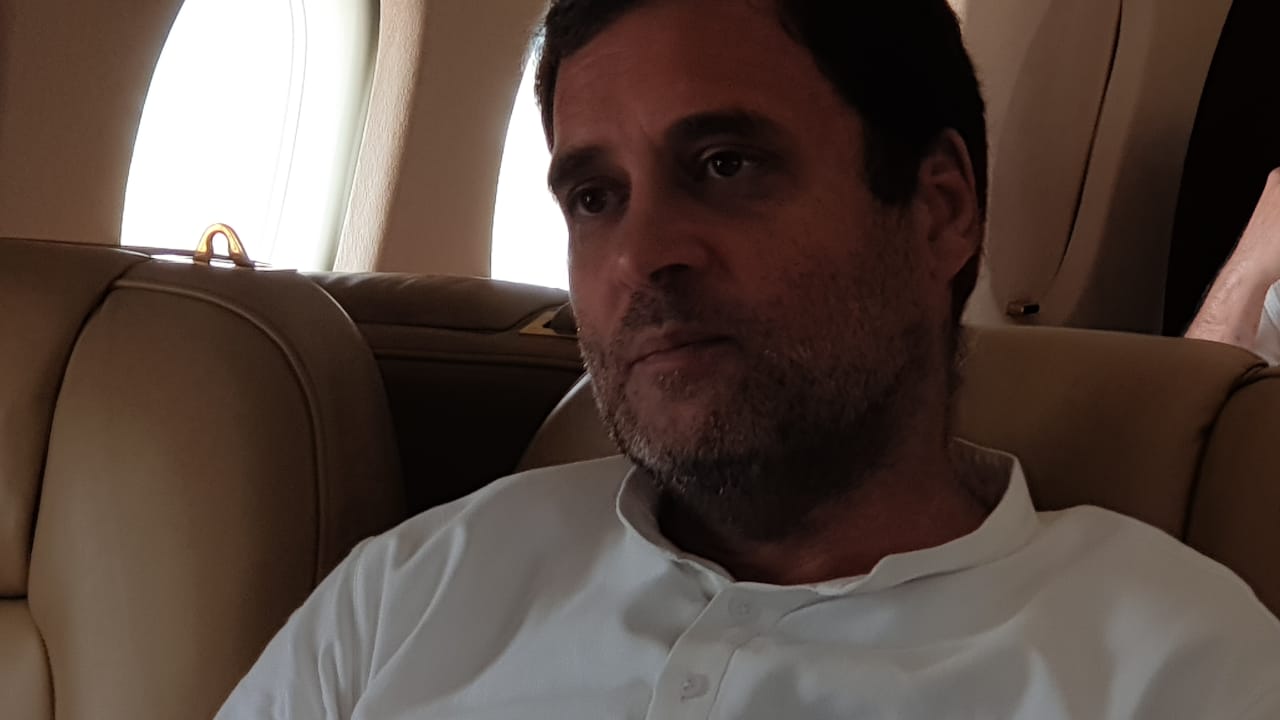 “Can you accompany RG in the morning for an interview with him?” I was asked. Pat came my response, “Of course, I can. Just let me know the drill and I will be there.” I was asked to turn up at the airport, where someone would receive me.

I was there 10 minutes before the agreed time since I was in no mood to miss this opportunity to interview Rahul. Soon, the person from Rahul’s core team greeted me inside the VIP lounge and asked me to accompany him to a chartered flight, parked at a distance on the tarmac. I was informed that the Congress president will be there soon.

While waiting for Rahul and his entourage to arrive, I decided to connect to Janta Ka Reporter’s website and bring out the original three pieces on the Rafale expose that we had carried in November 2017. I wanted to refresh his memory that it was us, who had first highlighted alleged irregularities in the Rafale deal.

Minutes later Rahul arrived and proceeded straight to my seat, shook my hand and said, “Hi how are you? Just give me few moments and I will be with you.”

The plane took off and Rahul asked one of his team members for a pen and paper as he turned his attention to one S to discuss the finer points about his party’s chances across India. The sight left me intrigued. Here was a man, who, not too long ago was termed a reluctant leader and who allegedly lacked depth in politics to lead his party. His attention to detail and ability to make the most of his time was an eye-opener to me. For, I too had slammed him on Twitter on multiple occasions, accusing him of indulging in flash-in-the-pan politics.

Meanwhile, I was chuffed to learn from one of his close aides how they felt bad for not inviting Janta Ka Reporter to interview Rahul earlier since ‘you were the people who broke Rafale.” I replied in jest, “Perhaps you can compensate with a video interview if Rahul becomes the PM.”

While discussing strategy and electoral prospects of his party with his colleagues, there were several moments when he shared a laugh with his team members over some lighter comments. As a silent observer from a distance, I could not help but wonder if Prime Minister Narendra Modi would make himself available to be party to such lighter moments involving his junior colleagues. “How would such conduct go with Modi’s perceived megalomaniac image?” I asked myself. The answer to that would be had only if Modi invited me to travel with him someday or agree to sit down for an unscripted interview.

This was also followed by a moment when Rahul discussed the safety risk attached to a helicopter vis-a-vis a plane. His team members questioned his rationale intermittently and he kept explaining to them patiently.

Nearly half an hour after take-off,  Rahul came and sat in front of me. We began our conversation. During our chat, Rahul did not come across as a hesitant politician anymore. His body language, demeanour and response to my questions were indicative of the fact that he was clear about his objective in politics and aware of the challenges attached. His eyes lit up every time I asked him about his sister Priyanka Gandhi Vadra and mother Sonia Gandhi.

He was transparent about his relationship with mother Sonia and sister Priyanka and their role in his life and this campaign. He did not exhibit political correctness or hesitance while responding to my question on the late entry of Priyanka into active politics. He said, “No, I’d spoken to my sister and we’d agreed that till her children were at home, and going to school, she wouldn’t be involved in politics. She wasn’t able to do it.” It was as if to give a sense of normalcy to their lives, the lives of the so called elite were also affected by the same trials and tribulations of our Mothers.

He didn’t stop here. He continued voluntarily, “I did ask her a couple of times and then I thought it was unfair of me to pressurise her and possibly make life difficult for her children.” It was clear that he wasn’t cooking up his replies, a behavioural trait that has routinely been a source of embarrassment and public criticism for Modi, Rahul’s political adversary.

Once again, I asked myself, “What are the chances of Modi ever showing this level of openness in his replies to such personal questions if again he made himself available for an unscripted interview.”

Rahul appeared to be beaming with confidence. I sought to test him with questions on the growing menace of communalism, erosion of government institutions, his vision, political goal. He was nimble-footed with his replies. All pointed to one fact that Rahul appeared to be in control of what he was talking about. Consider this reply on how he described his principal opponent Modi, “Because PM Modi tells so many lies, he gives you multiple options to attack him. You can attack him on jobs, on corruption, on agriculture, on the economy and so many other issues.” There was little doubt in my mind that Rahul knew his rival’s weak spots and had acquired the right proficiency to attack them.

Another revelation about him was his positivity. While Modi controversially built his campaign on negative issues such as instilling fear amongst Hindus and creating fake narratives of hyper nationalism and threats from Pakistan, Rahul Gandhi dismissed them as an excuse to hide Modi’s failure on performance. In contrast, in his prescription on restoring normalcy in a society that had become incredibly toxic, he appeared pretty upbeat and optimistic. “Hatred will go away much quicker than you think,” he said adding “Because a large amount of the hate is actually being driven by the top. You’ll see that the
moment the government changes, the moment a UPA government comes, there will be a dramatic reduction in hate. Almost naturally.” There was an attempt to repair and mend. A sense of hope.

He appeared humble and, in corporate terms, a consensus builder. When I asked him how he evaluated himself as a leader, his reply was worth pondering over. “That’s for other people to say,” he said adding that “That’s not for me to say. What I do notice is that I am constantly changing and evolving. Whether I’m evolving in a good way, is for the people of India and yourself to say, not me.”

In my 25 years of journalism, I have interviewed innumerable politicians, sportspersons and film stars from around the world, but did not come across anyone, who asked me, a probing journalist, to evaluate him or her. “My target is to express the voice of the Indian people, my target is to listen to them carefully, to try and understand what they want and to help them get what they want, and achieve what they like,” Rahul replied when I inquired if he had evolved in the last few years since taking control of his party.

He also did not appear to be intimidated by any number of questions from a journalist in a one-to-one environment. Immediately after our plane touched down the runway at our destination, I thanked Rahul for his time, only to be surprised that he wanted the conversation to continue as he said, “Are you sure you don’t want to ask any more questions because we still have few more minutes till we get out of the plane?”

I said I will take his offer gratefully and quickly squeezed a few more questions in the remaining time.

The innuendos around Gandhi have been aplenty. Modi’s troll army on social media have worked tirelessly to create Rahul’s image as Pappu, someone uninitiated and ignorant. Their campaign may have lost steam after a resurgent Rahul began to routinely embarrass Modi on the Rafale deal and other issues of failed promises and poor governance. If anything, going by the shenanigans of Modi in the last few days including his press conference that wasn’t, it’s anyone’s guess who has now emerged as a top contender for being declared a genuine Pappu. Even the fiercest critics of Rahul such as Sambit Patras and Smriti Iranis of the world, have realised that the joke will be on them if they chose to ridicule the former. The BJP has now found it self reeling under the pressure of constantly putting up a brave defence in the face of Modi’s ridiculous utterances. His radar, cloud science remark, digital camera-email to name a few.

After we deplaned, Rahul walked towards his helicopter, which was waiting to take him to his rally venue and I began to walk towards the airport since I had to catch my flight back to Delhi. I had barely walked few steps when I felt someone tapping my shoulder. I looked back to see that it was Rahul.

He put his arm around my shoulder almost in a half hug and whispered into my ear, “Don’t be scared.” I replied back smilingly, “you wouldn’t have had your Chowkidar Chor Hai campaign slogan if I was someone who would be easily scared.” 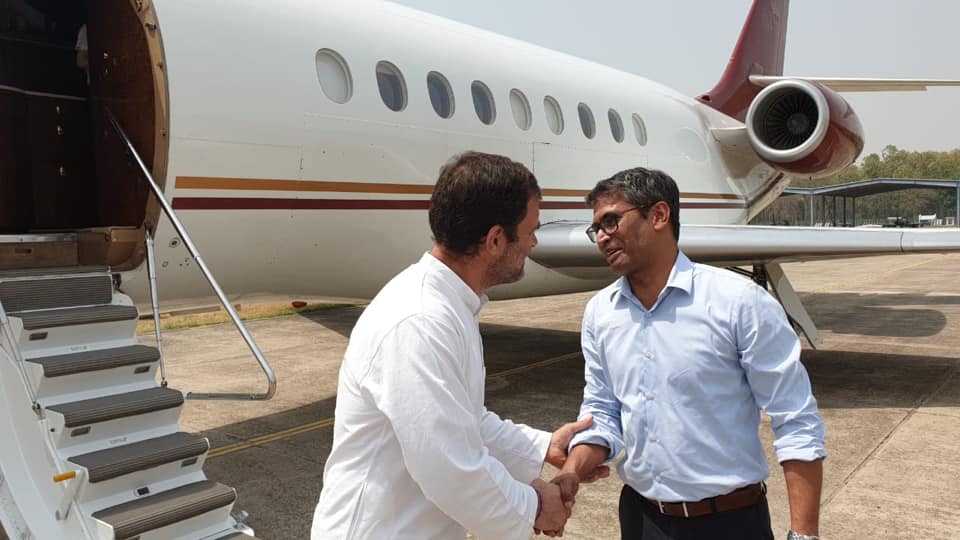 Rahul understood well that I was referring to our fearless journalism in putting the Rafale story out when other publications had refused to carry Ravi Nair’s exhaustive piece on the questionable defence deal. The Congress president smiled back, shook my hand warmly and headed back to his waiting chopper.