Arnab Goswami launched a blistering attack on Salman Khan using the ‘Bigg Boss of drugs’ jibe against the popular Bollywood actor as he chided former Bigg Boss contestant Arshi Khan when she dared the Republic TV founder to name the Bharat actor. Unable to accept the challenge for the fear of defamation from Salman, a visibly frightened controversial anchor evaded Arshi’s questions. 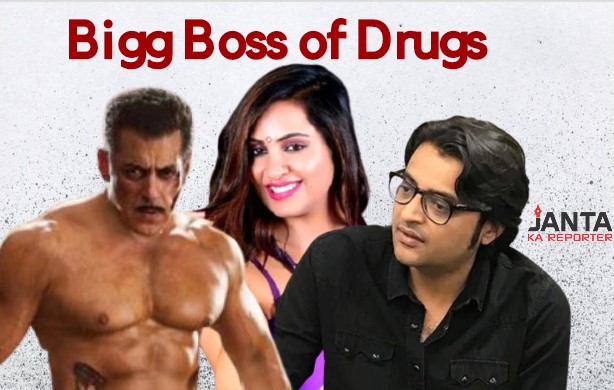 Former Bigg Boss contestant Arshi Khan asked, “First the King of Dubai jibe and now Bigg Boss of drugs, who are you hinting at?”

Little later into the programme, Goswami admonished Arshi by saying, “I am not in the mood of comedy. If you want to do a comedy, then go to the comedy channel, Tak.”

Goswami appeared to be hinting at Salman Khan’s reported stake in KWAN, which is currently facing the probe by the Narcotics Control Bureau in the drug racket case. Reports by certain media outlets claiming that Salman Khan had a stake in KWAN had prompted the Bollywood megastar’s lawyer to issue a statement. Salman’s lawyer had said, “Certain sections of media are falsely reporting that our client, Mr. Salman Khan, a leading Indian actor, has a majority stake in KWAN Talent Management Agency Pvt. Ltd. Mr. Khan has no stake, direct or indirect, in Kwan or any of its group entities.”

This is not the first time that Goswami has targeted Salman for his silence on the drug racket scandal hitting the Hindi film industry. Several top Bollywood actors including Deepika Padukone, Sara Ali Khan and Rakul Preet Singh have been summoned for grilling in the case.

Goswami questioned why Bollywood films had suddenly become popular in China, earning hundreds of crores of rupees. The Republic TV founder said that there was a direct link to the silence by top Bollywood stars on the drug racket case and ‘crores coming from China.’ ‘There’s a conspiracy behind this silence,” he declared.