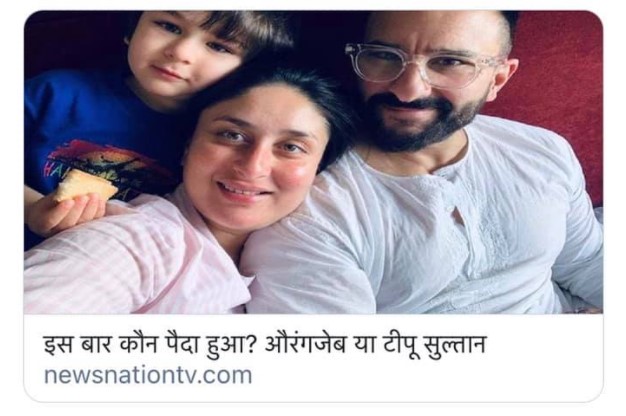 This was after New Nation, which has earned the notoriety of being one of those channels responsible for lowering the standards of journalism in India, flashed a seemingly disgraceful tweet mocking the second child of Saif and Kareena. Its headline asked, “Who will be born this time? An Aurangzeb or a Tipu Sultan?”

This evoked widespread condemnation from netizens. Vishal shared the tweet to tag the Mumbai Police as he wrote, “@MumbaiPolice This is a despicable and hate-filled headline aimed at fostering hatred between communities. Please take cognisance of the criminal intent and register a Suo Moto FiR against @NewsNationTV, its editor and owners.”

@MumbaiPolice This is a despicable and hate-filled headline aimed at fostering hatred between communities.

Please take cognisance of the criminal intent and register a Suo Moto FiR against @NewsNationTV , its editor and owners. https://t.co/LU1uRs6xhj

Soon, the questionable headline by News Nation had disappeared from Twitter. But furious Twitterati slammed the TV channel for its ‘insensitive’ headline targeting a one-day-old baby. User Sonbam Mahajan wrote, “This is a mainstream Indian news channel mocking a one-day-old baby by using an insensitive headline. Like really? Forget journalism, this hyperbolic clickbait doesn’t even qualify for entertainment. People who are celebrating such crassitude need help.”

User Melwyn wrote, “I seriously hope Saif and Kareena sue their asses off!” Twitter user Vishal Aggarwal wrote, “Shame on you; why do 1.35 billion Indian think that they have right to name their kids but Saif and Kareena don’t – get a life and STFU.”

Kareena and Saif had faced severe and crass criticism for their first child, Taimur, as they were accused of naming their child after a central Asian invader.

Kareena had later revealed that Saif was even ready to change the child’s name from Taimur to Faiz, but she was not ‘going to succumb to public pressure.’

Fifty-year-old Saif had married Kareena in 2012 after dating her for nearly five years. Kareena had opened up about splitting with Shahid Kapoor for Saif in an interview. They were blessed with another son on Sunday.