An imposter posing as the Ukrainian prime minister had called British Defence Secretary Ben Wallace, who later ended the phone call after becoming suspicious of ‘several misleading questions.’ Moments later, Home Secretary Priti Patel too took to Twitter to admit that she was also targeted with hoax calls last week. 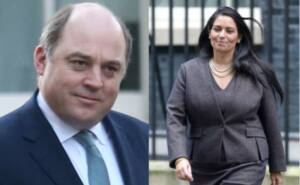 Wallace wrote on Twitter, “Today an attempt was made by an imposter claiming to be Ukrainian PM to speak with me. He posed several misleading questions and after becoming suspicious I terminated the call.” He added, “No amount of Russian disinformation, distortion and dirty tricks can distract from Russia’s human rights abuses and illegal invasion of Ukriane (sic). A desperate attempt.”

Patel’s tweet read, “This also happened to me earlier this week. Pathetic attempt at such difficult times to divide us. We stand with Ukraine.”

Quoting defence ministry sources, BBC reported that it was a ‘fairly sophisticated’ video call that was not made to Wallace’s own mobile phone.

The imposter reportedly asked Wallace about Nato and the state of the negotiations taking place between Ukraine and Russia.

Wallace, according to a defence ministry source, was asked ‘leading questions to encourage inappropriate comments’ but he ‘didn’t say anything that was not factual or appropriate.’

According to Sky News, Wallace was asked at one point, “Did you get the substance we have sent?”

The imposter also reportedly asked Wallace about Ukraine’s foreign policy, but the defence secretary became suspicious after the nature of questions turned ‘wild.’ Wallace was on a trip to Poland when he received the phone call.

The British government has been helping Ukraine both in accepting refugees and supplying anti-tank missiles. The government headed by Prime Minister Boris Johnson has also imposed a series of sanctions against Russian oligarchs, deemed to be close to President Vladimir Putin. This is done to weaken the financial power of the Russian president.