Republic TV founder Arnab Goswami on Thursday lashed out at his former employer Times Now and India Today calling them cowardice as he dared them to invite him on their TV channels to debate over the new viewership data released by BARC. 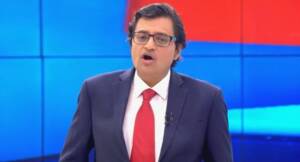 According to the new audience data, released after a gap of 18 months, Republic TV once again occupied the top spot in the English news genre, while Goswami’s Hindi TV channel, Republic Bharat, dislodged India Today Group’s Aaj Tak to become the number one TV channel in the Hindi news genre.

Wasting no time to embarrass both Times Now and India Today, Goswami said, “At the core of the attack on Republic was the accusation by three people, two of whom are in jail and a third who’s lost his job and is completely disgraced.about the TRP scam. The allegations cheered on by channels like India Today and Times Now was that the viewership of the Republic was fudged and the people like you received Rs. 500 a month from me as a bribe to watch Republic.”

BARC had stopped the release of its weekly audience data in October 2020 after Goswami faced allegations of manipulating data in favour of his channels. The then Mumbai top cop, Param Bir Singh, who had held an extraordinary press conference to accuse Republic TV of manipulating TV data, is currently in jail in an extortion case.

According to #BARC Republic Media Network is the Biggest News Network of #India ????

Goswami said on Thursday, “Well, today it’s historic because today the viewership ratings have come out after a year and a half. and today is the moment I was waiting for and my entire team was waiting for. and the moment that some channels desperately tried to avoid.”

That’s because, according to him, these channels feared being exposed after the ratings were released. Taking a dig at his former employer, Goswami said that Republic’s viewership was twice the number of Times Now. Calling India Today a ‘small TV channel,’ the Republic TV founder said, “Republic TV is 270% is greater than really small TV channels like India Today.”

Goswami didn’t stop here as he informed how ‘interestingly, neither of these two channels are doing a debate on the new viewership.’