The third umpire’s decision to declare Indian batsman Rohit Sharma out during the Thursday’s match against West Indies has left Indian fans incensed. Rohit Sharma was dismissed for just 18 even as the on-field umpire had decided that he was not out. 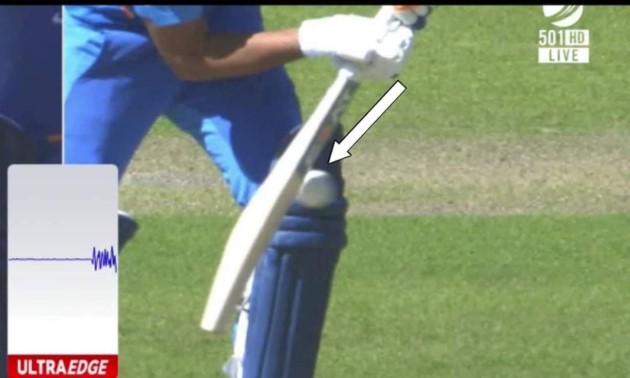 However, West Indies appealed for a review and the third umpire Michael Gough reversed the on-field umpire’s decision, bringing the reliability of the Decision Review System under the scanner.

The decision evoked plenty of reactions from social media users including TV presenters and cricketers. Gaurav Kapur wrote, “Was Rohit out?” Indian cricketer R Ashwin wrote, “What happened?? What have I missed?” Journalist Boria Majumdar wrote, “Did that hit the bat or pad and was it conclusive? @ImRo45 doesn’t think so but the umpire says out and that’s what matters for the West Indies.”

Elsewhere, Indian fans reacted angrily while slamming Gough for his questionable decision. Many took to Gough’s Wikipedia page to vandalise it by inserting expletive-laden comments.

Michael gough this is pathetic to see such type of quick decision on this level seriously man pathetic if you do this to #VijayShankar it will save you as well as Shankar. Anyway some typical cricket lover did this to you. Checkmate? #INDVsWI @ICC @BCCI pic.twitter.com/81ZIFzRiCq

Yeah, this is the madarchod who declared Rohit out. Michael Gough.
Wonder why he was so hasty. BSDK.#INDvsWI pic.twitter.com/UhjSp4it7K

India scored 268 in 50 overs for the loss of 7 wickets in 50 overs. Captain Virat Kohli was the top scorer with 72 runs, while MS Dhoni remained unbeaten at 52. KL Rahul and Hardik Pandya scored 48 and 46 respectively.