Trust Republic TV founder Arnab Goswami and Indian politicians to politicise everything. So, one wasn’t surprised when the usual suspects in the Indian politics and Goswami pounced on the news of the Indian cricket team contemplating wearing a new jersey against England in the current World Cup competition. Goswami launched a hashtag #MenInOrange to symbolise the new jersey having saffron as the dominant colour. To counter one of his guests, who did not agree with his support for the colour of the new jersey, he even threatened to wear a saffron tie. 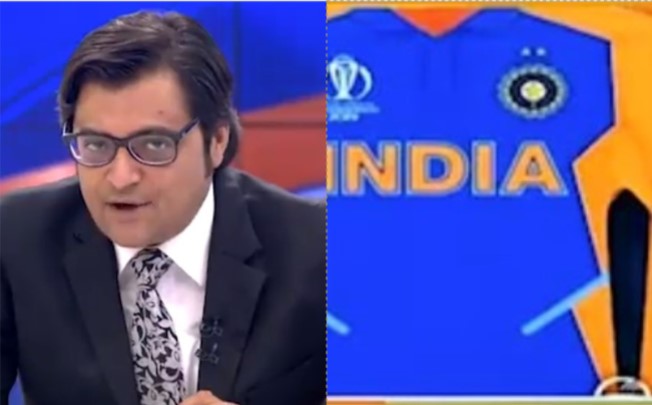 Addressing a guest, Goswami said, “I will change my tie to saffron if you don’t behave.” Pat came the reply from his guest, Dr. C. Rajasekaran, “You already have a saffron channel. Republic TV is a saffron channel.”

Stunned by the allegation of being a news channel that supports the Hindutva ideology, Goswami reacted angrily. He said, “What is it? What did you say Republic is? You are colour blind. This is red.”

“You are a saffron channel,” the guest reiterated.

“We are a saffron channel. Because of what. You wear blinkers on, you don’t see anything.

According to reports, the new design was prepared by a designer in the US after the ICC asked the Indian cricket board if they wanted to choose a different colour jersey against England, whose players too wear the blue jersey, but not similar to the ones worn by Indian players.

The ICC has introduced a concept of ‘home’ and ‘away’ during the ongoing World Cup competition. This concept is quite prevalent in football competitions such as the English Premier League, where home teams are identified with a permanent colour but often choose jerseys of a different colour for ‘away’ matches. This colour changes almost every season.