Former England skipper Michael Vaughan on Wednesday showered extraordinary praises on Babar Azam after the Pakistani skipper played a record-breaking knock to pull off a draw against Australia in the second Test. 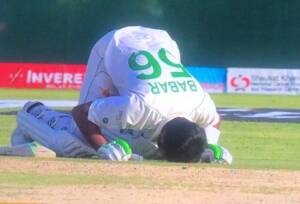 Vaughan said that Babar was the ‘best all round’ batsman in the world after the Pakistani captain faced almost 72 overs and spent 10 hours at the crease to score 196 in his side’s second innings in the Karachi Test.

Vaughan tweeted, “Without question I think @babarazam258 is the best all round Batter in the World right now .. Brilliant across all the formats .. #PAKvAUS.”

Pakistan needed 511 runs to win the match with two days of play left in the match. The target became even more daunting after the hosts lost two wickets when the team’s total was just 21. Babar and Abdullah Shafiq added 228 runs for the third wicket, raising hopes for a possible Pakistani win. Shafique was unfortunate to not complete his century and was dismissed at 96.

Babar, however, kept defending the wicket from the other end. He was well supported by Mohammad Rizwan, who remained not out at 104 when the match ended in a draw. Babar was also unlucky to not complete what would have a majestic double-century as he departed at 196. Pakistan ended their second innings at 443-7.

Babr, however, became the highest-scoring skipper in the fourth innings of a Test match, beating the previous record of England’s Michael Atherton, who had made 185 not out against South Africa in 1995.

Babar batted for 603 minutes, while Atherton’s innings had lasted for 643 minutes.

Babar is the world’s number one T20 batsman and his knock in the Karachi Test shows he can excel in any format of the game. The three-match series is currently tied 0-0 with the third match scheduled to start from Monday in Lahore.