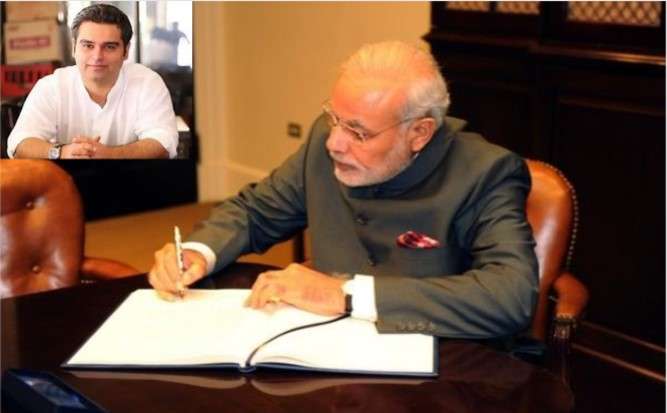 The controversy was triggered by Merchant’s Instagram story, where the furniture designer shared the email that he had received from Narendra Modi’s office. He also attached the reply he sent to the sender of the email.

According to Merchant, one ‘Vivek Kumar’ who said he was a ‘Private Secretary to PM’ wrote to him asking to design a special table for Modi. “Dear Mr. Merchant, we are pleased to inform you that our Prime Minister Shri Narendra Modi has identified you and your design practice to design and build a permanent installation/ executive table for exclusive use by the Prime Minister. The Desk will be placed in the PMO and used by subsequent Prime Minister to come,” the email from Kumar read.

Merchant’s email reply to Kumar read, “Thank you for considering me and my practice for such a prestigious project. Unfortunately due to my political and social views, I would like to respectfully decline this opportunity and wish not to be considered as a contender for the same.

“I would have made this desk from timber and raw materials from all over India, to symbolize our unity, Fraternity, and diversity.

“However, I would like to inform you that I am first and foremost a Gandhian and believe in the true spirit of Ahinsa, Non-Violence, and social change thru civil disobedience. I have learned firsthand from people I know who have walked with Gandhiji, The real meaning of swaraj. Gandhiji wanted every Indian to be the master of himself, whether this meant independence from the British or any other colonial power was irrelevant- his message was the same, ‘Swarajmeant self-rule, that every Indian must be a master of himself before he can resist or uproot an external master’. As a designer and creator, I have taken this to mean that being a master of one’s self is the first step to being a good designer.

“In the discipline of design, one is one’s own enemy and must surmount great odds to defeat one’s own ego, self-doubt, judgments, and assumptions. In all fields of art, design or creativity, this is the key to being liberated and creating freely without prejudice, judgment, and morality. I have noticed that the actions and predilections of your government and its policies have always tried to stifle these liberating sentiments within people only to replace it with a reductive, obtuse and facile understanding of the world, Our history, and where we as a people are heading.

“It is no secret that I have been fundamentally opposed to the politics and policies of our current Prime Minister and the ruling party. The India that you’ll are trying to make has never existed in the past, has no basis in present, and has no warrant in the future. Your India is prejudiced and hateful, exclusive and racist. My India is secular, plural, Inclusive, tolerant and secular, plural, inclusive, tolerant and a civilizational forcethat has a seven thousan years old record of accepting and incorporating outsiders.

“While 20% of my fellow citizens live below the poverty line and while 22% of my fellow citizen who is Muslim live in Marginalised conditions created by your government and its policies, I find it morally and unethically feasible to design and create a desk for the head of our government on which laws and policies will be designed to further this agenda of segregation and deprivation of minorities.

“Please remember that history treats the supporters, suppliers, and propagators of Nazis as Nazis themselves, I do not want to have anything to do with, nor contribute to this regime lest history associates me with your racism, fascism, reductive and binary thinking as well as your thuggery. As a designer, I seek to inspire and uplift the quality of life of the people around me.

“Building a table for the PMO and contributing to your regime, not only diminishes my karmic force in this universe but seems to be a disservice to my friends, family, and staff who come from marginalized backgrounds, are minorities, are part of the LGBTQ community or are Dalits and Schedule casts. Only when we really mean ‘we all with no exceptions’, will I, with pride and with my full inner temerity and confidence, be able to build for the head of our state a ‘Swatantra Table’. Until then I suggest you find another designer and maker for your desk.”

While Merchant earned widespread plaudits for his bold stand against bigotry and politics of hate promoted by the BJP on Narendra Modi’s watch, the Delhi Police moved in with lightning speed to counter the designer’s claims. The Delhi Police, which report to the central government led by Modi, tweeted, “We have received a complaint regarding forgery, impersonation and identity fraud of an office bearer at the Prime Minister’s Office. Matter is under investigation.”

We have received a complaint regarding forgery, impersonation and identity fraud of an office bearer at the Prime Minister’s Office. Matter is under investigation.@PMOIndia @HMOIndia pic.twitter.com/1r1mhPCvoX