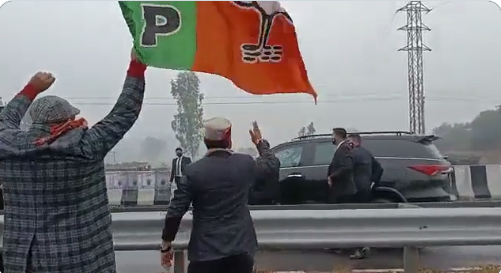 A statement from the MHA had blamed the Congress-led government of Punjab for not doing enough to remove protesting farmers. However, a new video shows those chanting slogans were BJP workers.

In the viral video, a group of BJP supporters are sen coming close to Modi’s convoy as they raise slogans in favour of their party. BJP workers chanted ‘BJP Zindabad, Narendra Modi zindabad’ slogans as the prime minister’s cavalcade passed.

Modi was on his way to Firozpur when his convoy was stuck on a flyover in Bhatinda. Modi had ditched the scheduled helicopter ride due to poor weather and instead decided to travel to Firozpur, the place of his planned rally, by road.

The matter came up for a hearing in the Supreme Court on Thursday as a lawyer sought the top court’s intervention to ensure this episode is not repeated.

As expected, questions are now being raised on BJP’s claims on the ‘security breach’ of the prime minister.

Was Modi threatened by BJP supporters?

Why did Modi fake the security threat drama when he was getting cheered by BJP supporters holding BJP flag ?#पंजाब_माफ_नहीं_करेगा pic.twitter.com/zBafnFYUux

BJP supporters and party workers are threat to the Prime Minister? How? These are the only people who got close to his car. pic.twitter.com/hQj1LSPX9A

Was Modi claiming that he was under threat from BJP workers? ????????pic.twitter.com/YNKQM9QIJq

Punjab Chief Minister Charanjit Singh Channi had rubbished BJP’s claims on the breach of Narendra Modi’s security saying that the reason for the prime minister’s frustration was the poor attendance at the venue of his planned rally.

Also Read: “You have been wrongly briefed by the BJP IT Cell “: Saina Nehwal faces ridicule after wrongly claiming attack on PM Modi in Punjab

Modi had also met President Ram Nath Kovind to apprise him about the alleged security breach.