Terror-accused BJP MP Pragya is no stranger to spreading Islamophobia. The prime accused in the Malegaon terror attacks, Pragya was controversially fielded as a BJP candidate from Bhopal in the 2019 Lok Sabha polls. She defeated veteran Congress leader Digvijay Singh to become the first terror-accused to enter India’s parliament. Now, a viral video has shown an upright IAS officer shutting up the terror-accused BJP MP as she desperately tried to spread Islamophobia in an official meeting involving police officers and the district administration of Bhopal. 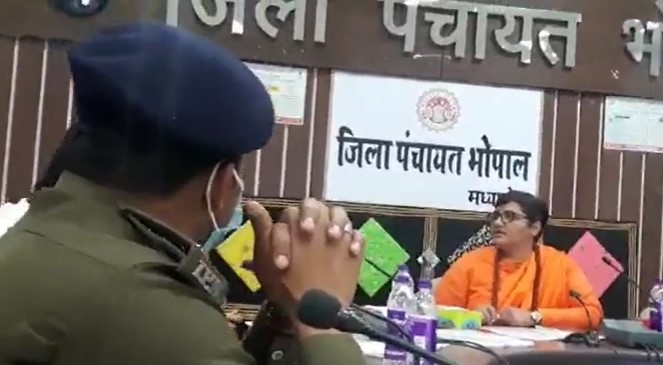 In the viral video, Pragya is seen alleging how a mazaar (Muslim shrine) was built on a pavement. Addressing the district administration, the terror-accused MP asks, “Was this (the mazaar) there when the pavement was built?”

She was left stunned by what the District Magistrate Avinash Lavania had to say. The 2009 IAS officer replied, “Yes madam, this (the mazaar) already existed (during the construction of the pavement).”

A visibly embarrassed Pragya replied, “No, it wasn’t there. That place was constructed later.”

The DM remained adamant and appeared in no mood to accept Pragya’s lies as he said bluntly, “That’s not correct madam. That place was already there when the pavement was built…You can verify these facts.”

Sharing the video, journalist Makarand Kale tweeted, “…Sadhvi Pragya, there are other worries in life than religion.”

Lavania is a 2009 batch IAS officer and was appointed as the District Magistrate of Bhopal in 2020. He had earlier served as the Director at Food, Civil Supplied and Consumer Protection in Madhya Pradesh.