There are reports of several deaths and many more injuries during a stampede at a Cameroon stadium during the Africa Cup of Nations football match. According to authorities, at least six people are confirmed dead while many more remained critically injured. 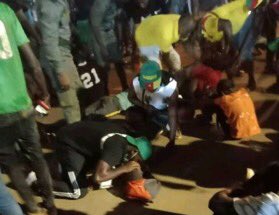 The stampede occurred when football fans made desperate attempts to get inside the Paul Biya stadium in a neighbourhood of the capital Yaounde.

News agency AP quoted Naseri Paul Biya, governor of Cameroon’s central region, as saying that the number of those killed in the stampede could rise further.

According to the BBC, a number of children had lost consciousness in the tragedy

Meanwhile, the last 16 round of match between Cameroon and Comoros went ahead despite the tragedy with hosts winning the match 2-1.