A newspaper interview on the feud between Narendra Modi and one of his ministers claiming to enjoy the support of 252 BJP MPs has triggered a huge social media storm. The interview was published by Maharashtra Lokmat Times, which did not reveal the identity of the minister claiming to threaten Modi with the support of 252 MPs. The said interview was published in the Nagpur edition of the Lokmat Times. 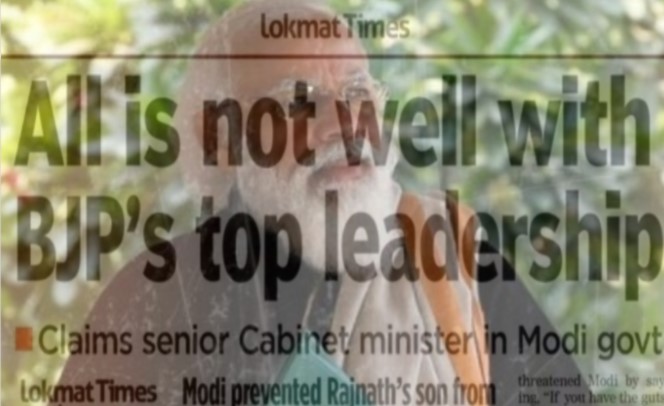 The report went on to claim that the unnamed minister was once so hurt by Modi that he told the prime minister, ‘If you have the guts, then try to remove me from the council of ministers.’ The unnamed minister, according to Lokmat Times, said that he had the power to bring down the Modi government since he enjoyed the support of 252 MPs, but he was bound by ideology.

The report in question also claimed that Modi had prevented Pankaj Singh from becoming a minister in the UP government after Yogi Adityanath won a decisive mandate for the second time. Pankaj Singh is the son of Defence Minister Rajnath Singh and represents Noida as an MLA.

The cabinet minister speaks to @LokmatTimes_ngp off the record pic.twitter.com/UKxacgHvK6

If this minister can take away 252 MPs, I should be able to take away atleast 50.

Bring down Modi govt bcz 252 MPs support him.???
If he has that support,be the PM,why be a b!tch https://t.co/b6BFhLyU2G

Surely @LokmatTimes_ngp #Nagpur is not a friend of the “senior cabinet minister”. If he indeed has 252 MPs with him – why let ideology come on the “highway” (no pun intended) to power, @sheela2010 #ModiGovt https://t.co/SiJdl0dZHH

Who is the Cabinet minister who:

▫️challenges @narendramodi to remove him if he has guts
▫️claims he can take away 252 MPs and bring down government
▫️reveals how Modi became @PMOIndia by using agencies?

There has been no reaction from the government or the BJP on the claims made by the Maharashtra-based newspaper.