The Election Commission of India is facing netizens’ wrath after a video of polling officials breaking the seal of a VVPAT (Voter Verifiable Paper Audit Trail) machine soon after the voting in Uttar Pradesh went viral. The polling officials said that they had to break the seal since they had forgotten to remove the batteries from the machine. 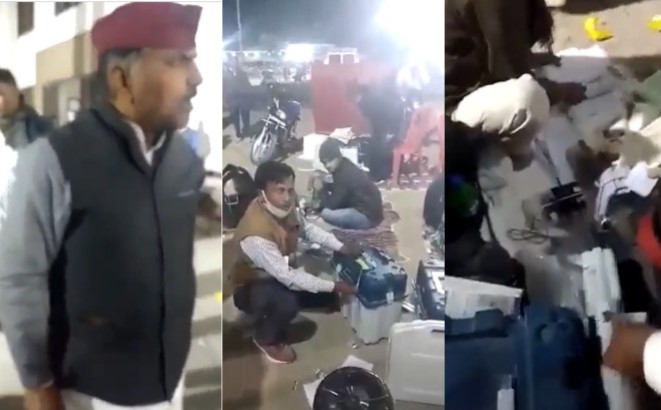 In the viral video, a person claiming to be a Samajwadi Party candidate could be seen lashing out at the polling officials for breaking the seal of a VVPAT machine after the votes have been cast and machines packed.

Launching a tirade, the SP candidate asked the polling officials if they had the instruction from the Election Commission to break the seal. The candidate asked, “You’ve brought these machines after applying seal on them in the presence of polling agents. On whose orders are you breaking them now?”

When an election official justified breaking the seal to remove the batteries, the SP candidate lost his temper as he asked, “Then you should have removed the batteries at the polling station. This is your fault….Are you guys conducting polls and indulging in theatrics?”

The video is believed to have been in Kanpur, which went to the polls in the third phase on 20 February. Janta Ka Reporter cannot confirm the authenticity of the video, which was shared by journalist Sanjay Sharma. On the day of voting in Kanpur, the Samajwadi Party had alleged that votes cast in its favour were going to the BJP. The district administration had rejected the allegations.

Experts and opposition parties have often alleged electoral fraud using EVMs by the BJP. In 2019, Samajwadi Party candidate from Badaun, Dharmendra Yadav, had alleged that EVMs kept in a strong room in Sambhal had been tampered with after breaking open the strong room’s seal.

Sabhal ADM (Administration) Lavkush Tripathi had said that a parrot got entangled in the net and in an effort to take it out, a part of the net of the outer gate was shifted from its place.