Critics of Prime Minister Narendra Modi have poked fun at him after the government broadcaster Prasar Bharti allegedly deleted a video of a crowd chanting ‘Modi down down’ on foreign soil from Instagram. The video in question was of Modi receiving a guard of honour in Berlin during his trip to Germany when a group of protesters could her heard chanting slogans against him. 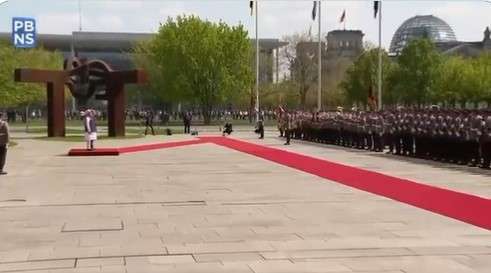 Sharing the video, former Amnesty India head Aakar Patel wrote, “video taken down by prasar bharati from their insta handle. because of what happens at 20’.”

video taken down by prasar bharati from their insta handle. because of what happens at 20’ pic.twitter.com/s7cq6tQ8yz

Similar reactions followed from others. Congress leader Manickam Tagore tweeted the video by taking a dig at the Indian media. He wrote, “Indian “media” can’t hear ? it Modi down?”

Here’s how netizens reacted to the video.

International beizzati starts at 20 seconds till 34 seconds.
??
You know what they are chanting ?
Modi Modi Bhaag Bhaag 😉
"Modi Modi Down Down" ?? pic.twitter.com/HAmwkk5PGQ

International beizzati starts at 20 seconds till 34 seconds.
??
You know what they are chanting ?
Modi Modi Bhaag Bhaag 😉
"Modi Modi Down Down" ?? pic.twitter.com/HAmwkk5PGQ

Leaders tippy toe around the violent communalisation Modi’s term has witnessed, so it is upto civil society to speak for truth.

Shame accolades for #ModiInBerlin as protesters purportedly shout “Modi, Modi down, down”, which actually sounds more B word?pic.twitter.com/rBh3t17Nn4

Down down Modi Modi: Berlin Germany

Modi is currently visiting European countries Countries visited by him include Germany, Denmark and France among others. In Germany, Modi met Chancellor Olaf Scholz.

Modi also tweeted a photo himself with Norwagian PM Jonas Gahr Støre as he wrote, “Had a productive meeting with PM @jonasgahrstore of Norway. Our talks included furthering cooperation in sectors such as the blue economy, clean energy, space, healthcare and more. Norway is a key pillar of India’s recently announced Arctic Policy.”