Prime Minister Narendra Modi on Thursday launched a tirade against Arvind Kejriwal as he urged voters in Punjab to take allegations made by former AAP leader Kumar Vishwas very ‘seriously.’ 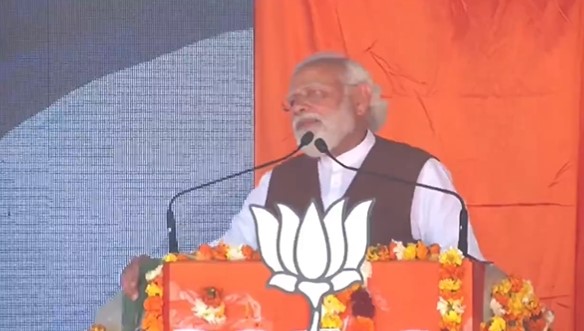 Addressing an election rally in Punjab, Modi said that Vishwas was forced to go public after the pain inside him may have become unbearable. Terming the former AAP leader’s allegations against Kejriwal ‘dangerous’, Modi urged voters to remember the Delhi chief minister’s plans.

“Their (AAP’s) intention is far more dangerous. You must have heard. Yesterday, one of their very reliable friends, who was in charge of their (AAP) election campaign here and was their close confidante. He (Vishwas) used to stand holding the national flag during Anna Hazare movement.”

Vishwas on Wednesday had said that Kejriwal had expressed his desire to become the first prime minister of an independent Punjab during the last assembly polls.

Modi said that Vishwas a renowned poet and thinker and immensely popular amongst India’s youth and his words must be taken seriously.

“As a poet and thinker, the country’s younger generation wait for hours to listen to him. This man, who’s always in prayers for Ma Saraswati, revealed yesterday (about Kejriwal’s alleged plans to become the first prime minister of independent Punjab). He may have been forced to say this after the pain inside him became unbearable. Allegations made by him are very dangerous,” the prime minister added.

Modi said that every single voter in Punjab must take Vishwas’ allegations very seriously since the AAP was harbouring dreams to break Punjab.