Zee News has issued a second extraordinary apology on TV in as many days for running fake news on Rahul Gandhi by linking his comments to the beheading of Udaipur tailor Kanhaiya Lal. 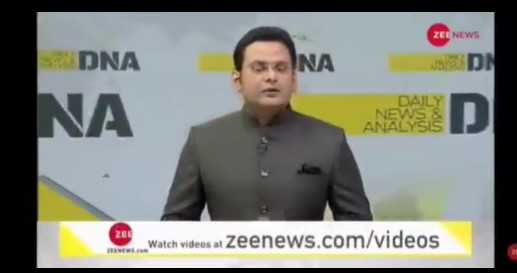 Zee News anchor Rohit Ranjan appeared on the channel’s prime time show, DNA, to make a profound announcement. The anchor said, “It was broadcast by mistake in relation to the Rajasthan murder case. This was a human error and we seek forgiveness for that.”

The anchor added, “We would like to make it clear that there was no bad intention behind this mistake. Shri Rahul Gandhi is a respectable MP from Wayanad and a senior leader of the Congress. There was no intention to damage his reputation. We seek forgiveness for this mistake once again.”

The anchor announced that Zee Media had taken the matter seriously and sacked two employees with immediate effect for the costly lapse.

Congress leader Jairam Ramesh had written to BJP President JP Nadda highlighting how some of his party leaders were sharing the fake video from the Zee News broadcast to malign Gandhi and the Congress. This was after Rajasthan BJP leader and former union minister, Rajyavardhan Singh Rathore was seen sharing the same video to attack the Congress. Twitter had marked his tweet as manipulated post.

During his visit to his constituency in Wayanad in Kerala, the Congress leader was asked about the act of vandalism by SFI workers targeting his office. Replying to a question, Gandhi had said, “First of all. This is my office but, before being it my office, this is the office of the people of Wayanad. However, the violence never resolves any problem. They are also children. Fine, it’s not a good thing to do, but they’ve acted in an irresponsible manner. I don’t have any hostility towards them.

“They are kids. I don’t think they understand the consequences.”

Zee News in its prime time programme, DNA, had said Gandhi had called the killers of Udaipur’s tailor ‘they are kids.’

The Zee News anchor had said, “And in the end, we would like to you show you that statement of Rahul Gandhi again whereby he’s calling the accused of the Udaipur murder as ‘kids.’