Union Minister Smriti Irani was taken aback when a senior Congress functionary decided to ambush her on a Delhi-Assam flight over the hike in fuel prices. This came as a reminder of Arnab Goswami being sensationally ambushed by comedian Kunal Kamra in the past. 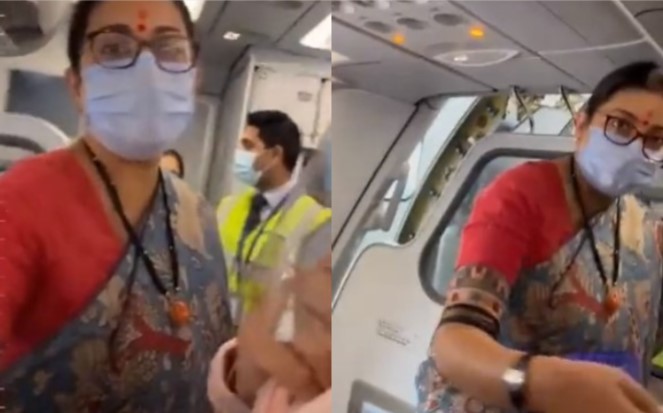 Immediately after the flight landed, Netta D’Souza, the acting chief of Congress women’s wing, decided to grill Irani over the unprecedented price hike in fuel prices under the Narendra Modi government. D’Souza made sure that her camera is turned on as she sought Irani’s response.

Caught unaware, Irani first asked D’Souza to allow other passengers to leave the plane accusing her of blocking them. The Congress leader, however, was in no mood to miss the opportunity to heap embarrassment on the union minister, who routinely led street protests when fuel prices rose during the UPA government before 2014.

When D’Souza grilled Irani about stoves running out of gas, Irani said, “Please don’t lie.” The union minister then accused the Congress leader of accosting her without her permission. D’Souza quickly reminded her that she was a union minister, and a public servant.

Also Read: Air India cancels flight ticket of another Kunal Kamra mistaking him to be comedian, who grilled Arnab Goswami

Sharing the video, D’Souza wrote, “Faced Modi Minister @smritiirani ji, enroute to Guwahati. When asked about Unbearable Rising Prices of LPG, she blamed Vaccines, Raashan & even the poor! Do watch the video excerpts, on how she reacted to common people’s misery!”

When asked about Unbearable Rising Prices of LPG, she blamed Vaccines, Raashan & even the poor!

Do watch the video excerpts, on how she reacted to common people's misery ! ? pic.twitter.com/NbkW2LgxOL

The Youth Congress had posted Irani’s poster in Delhi where members of the public were seen mockingly holding prayers to highlight the irony of the minister’s silence.

The Narendra Modi government has hiked the price of petrol 14 times in the last fortnight. The price for one litre of petrol has now gone up by Rs. 10.

The Congress has made the fuel price hike their single-biggest agenda, taking potshots at the BJP government with creative banners and posters. The BJP had come to power promising to control the inflation and fuel price in 2014. However, the party has failed to check price hike in the last eight years.