Neha Kakkar’s video with Himanshi Khurana aka Punjab’s Aishwarya Rai and Asim Riaz has occupied the number 1 position on YouTube within hours of its release. Neha’s latest feat came just days after Kapil Sharma mocked the Indian Idol judge in the presence of Archana Puran Singh. 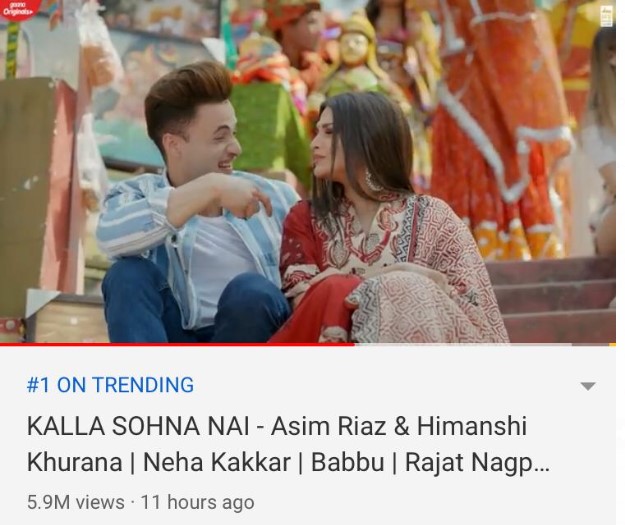 Neha’s video titled Kalla Sohna Hai was released on Thursday evening and within hours of its release, the video clocked more than six million views on YouTube, trending at number 1 position. This is the first time this year’s Bigg Boss’ first runner-up Asim Riaz and his girlfriend Himanshi Khurana featured together in a video.

As expected, fans were left smitten by the on-screen chemistry of Asim and Himanshi. Neha wrote while commenting on her own video, “#KallaSohnaNai With Love for You all!!” As for fans, one wrote, “Himanshi killed with her expressions…Asim is born cute.” Another commented, “Everything is just so positive about this song.”  Another commented, “Himanashi is so graceful throughout this song……love her gracefulness.”

Earlier, Neha had taken to Instagram to announce the release of her much-awaited video featuring two of the most talked-about reality TV stars.

This is Asim’s second music video since leaving the Bigg Boss show. His first album was alongside Bollywood actress Jacqueline Fernandez.

Neha was recently in the news after a viral video showed her slapping TikTok star Reyaz Aly. She also featured prominently on The Kapil Sharma Show her expenseafter its host Kapil Sharma cracked several jokes at while making fun of her name in the presence of Archana Puran Singh.

Indian Idol Sunny Hindustani had recently revealed how Neha Kakkar rejected Aditya Narayan’s marriage proposal. Days later, Aditya had announced that he was taking a break from TV for some time.