Bollywood actor Akshay Kumar on Wednesday interviewed Prime Minister Narendra Modi on issues that were apolitical such as if the latter ate mangoes and, if yes, whether he preferred to eat them using a fork or by simply sucking them using his hand. The Khiladi  actor also reminded Modi how he had shared jokes with him when the two met in Gujarat during the latter’s tenure as the state’s chief minister. 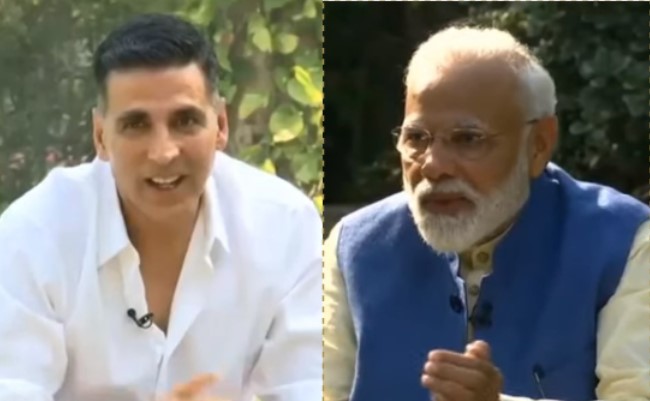 Taking the conversation further, Akshay sought Modi’s permission if he could crack a joke. Akshay Kumar said that an elderly Gujarati was on his death bed when he inquired about his son, daughter and wife. After each one of them said they were by his bed, the elderly Gujarati man reacted, “If all of you are here with me, then who’s looking after the shop?”

This, the actor said, showed just how much trade meant to a Gujarati. His joke left Modi in splits. Akshay was using the joke to make his point in reference to Modi’s claim that he had refused to use the money that he saved from his salary during his CM tenure after he became the country’s prime minister. Modi said that he asked his staff in Gujarat to use that money for the welfare of their children, particularly their daughters.

This prompted Akshay to ask Modi, “Are you indeed a Gujarati?” He clarified that a Gujarati is known to never part with his money. This was the context of Akshay’s joke.

In response Modi too decided to crack a couple of jokes. Modi said that once a train stops at a station and a passenger sleeping on the upper berth asked someone at the platform, “which platform is this?” That person replied, “I will tell you if you pay chaar aana (25 paise).” The passenger replied, “No need to reply, now I know it’s Ahmedabad.”

Both burst into laughter.

Modi said he was going to crack another joke, which was taken from a real life story. He said, “Many years ago, I got off a train and began to walk towards the RSS office when I saw an auto also moving next to me at a slow speed.” Modi said that when he asked the auto driver why he was driving his vehicle at a slow speed next to him, the auto driver asked him if Modi was a samajwadi since samajwadi leaders, according to the driver, had the habit to hire the auto at a distance from the railway station so that no one could accuse them of living a comfortable life.

However, Akshay did not laugh at this joke even though Modi repeated his ‘punch line’ twice. Akshay ended Modi’s embarrassment by asking if they could proceed to the lawn for the remainder of the interview.