Prime Minister Narendra Modi on Wednesday told Bollywood actor Akshay Kumar that he often read tweets posted by him and his wife Twinkle Khanna and also noticed the latter’s anger against him. 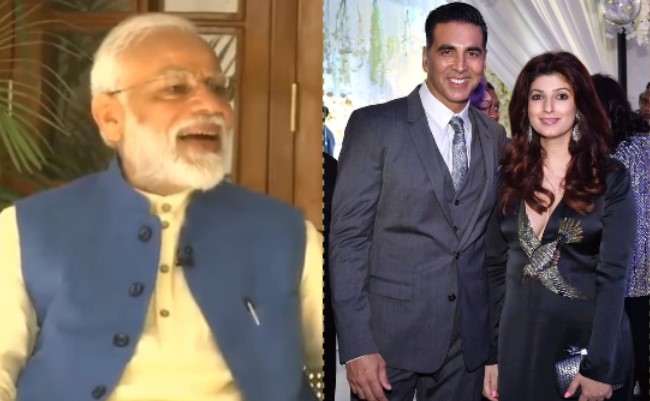 When asked if he followed the goings on on social media platforms, Modi answered in the affirmative, he said, “Of course I follow social media’s goings on. This helps me understand what’s happening outside. I also read tweets posted by you and your wife Twinkle Khanna. The way she vents out her anger at me, I get to understand that your marital life must be very peaceful.”

Responding to Modi’s comments, Twinkle wrote, “I have a rather positive way of looking at this-Not only is the Prime Minister aware that I exist but he actually reads my work :)”

I have a rather positive way of looking at this-Not only is the Prime Minister aware that I exist but he actually reads my work 🙂 ? https://t.co/Pkk4tKEVHm

Akshay is known to be soft on the BJP, while Twinkle has often been seen as a critic of Modi. While Times Now is a known supporter of the BJP and its Hindutva ideology, the group’s new channel, Mirror Now, is seen to be attempting to woo non-BJP constituencies.

Here are some other reactions on social media on Modi’s comments on Twinkle;

What a Terrific Interview of @narendramodi Ji, @akshaykumar well done….

Twinkle Khanna and Akshay Kumar- I can never understand how they can manage to have such diverse political leanings. ? Something to learn from them. https://t.co/7es3PutZxV

This is probably the best part of pm ‘s inteview today .. talking about @mrsfunnybones and @akshaykumar .. how twinkle khanna roasts pm on her twitter .. how it might helps in maintaing peace at home ..
मैं इस तरह भी आपके काम आया – मोदी ??? #AkshayInterviewsModi https://t.co/TKAJ43iCTN

I so wish it was @mrsfunnybones and not @akshaykumar interviewing the PM. C’mon Khiladi ask some tough questions.

Last week Twinkle had courted controversy after she posted a photo of a boy with his face covered by a pair of men’s underwear. She used the photo to mock the supporters of Delhi Chief Minister Arvind Kejriwal.