Royal Challengers Bangalore on Sunday defeated Sunrisers Hyderabad in their IPL encounter even though the team’s former captain, Virat Kohli, once again was out without scoring a run. Kohli’s dismissal for a duck prompted his detractors to trend ‘Chokli’ on Twitter. 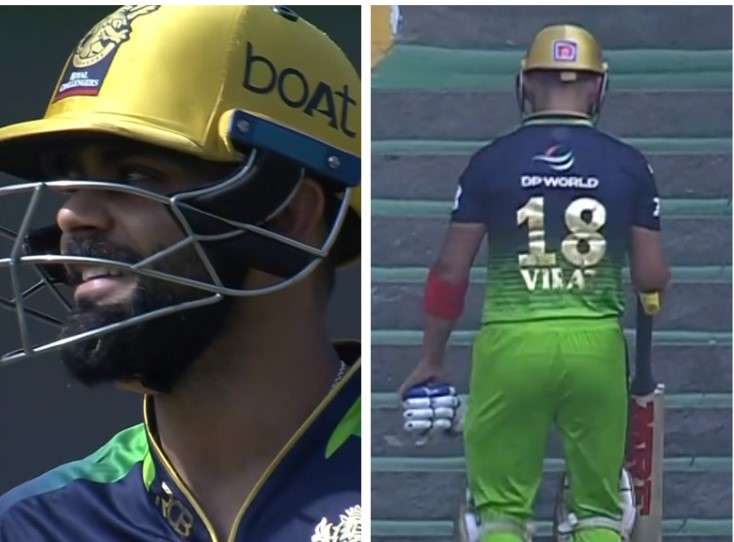 This was Kohli’s third golden duck in the IPL 2022, making it one of the worst seasons for the former India skipper. Ironically, Kohli was out for a golden duck when Royal Challengers Bangalore met Sunrisers Hyderabad last month. Hyderabad had defeated Bangalore by nine wickets in that match.

Batting first, the RCB made 192-3 in 20 overs with Faf du Plessis playing a captain’s knock as he remained not out at 71 from 50 balls. Dinesh Karthik took just eight balls to score 30 runs, while Rajat Patidar contributed with 48.

In response, Sunrisers Hyderabad were all out for 125 in 19.2 overs. Wanindu Hasaranga was the tormentor-in-chief for the SRH as he finished with an impressive spell of 5-18 in four overs.

Even though the RCB comprehensively defeated the SRH, Kohli’s detractors, mostly the fans of Rohit Sharma, took to social media to trend ‘Chokli.’ The term ‘Chokli’ was coined to mockingly rhyme the former India skipper’s surname with an intention to declare him a choker.

Choking against Williamson's team is not a new thing for Chokli pic.twitter.com/e6OmzIGCDs

Another golden duck for chokli???????

There’s nothing new about the rivalry between the fans of Kohli and Sharma. Even before Sharma replaced Kohli as the captain of Team India in all three formats of the game, Kohli was often asked about his much-talked-about rivalry with his teammate.

In 2019, the former India captain had finally broken his silence on media reports saying that claims of a rift between him and Sharma were ‘ridiculous.’

Kohli had said, “It’s ridiculous to read such stuff that comes out. I mean, I’ve been to a few public events and the public sentiments that I feel, everyone comes to me and say ‘what game you guys played.’ It is baffling to read (reports of an alleged rift). We are feeding off lies, overlooking facts & turning a blind eye to all the good things that have happened. It is disrespectful.”