A team from the Rajasthan Police once again visited Aman Chopra’s house in Noida on Sunday to arrest the controversial anchor working for Mukesh Ambani’s TV channel. Chopra is believed to be absconding for 10 days with his house locked. 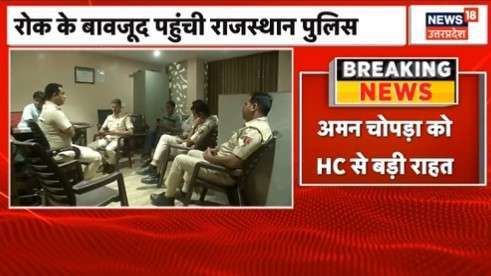 The Rajasthan Police team had pasted the arrest warrant on the main door of Chopra on Saturday after they could not find the anchor at his house. The cops had also visited the office of News18 India a few days ago but the anchor had mysteriously disappeared and did not appear on TV to present his show for several days.

Chopra, notorious for his Islamophobia, was caught peddling fake news, this time on the demolition of a 300-year-old temple in Rajasthan’s Alwar district. Enraged netizens had taken to Twitter to trend #ArrestAmanChopra, asking Rajasthan’s Congress government to punish the serial offender for using Mukesh Ambani’s TV channel to spread hate in society.

Reacting to the demolition of a 300-year-old temple in Alwar at the behest of the BJP-run civic body in the district, Chopra had said that the move was designed to avenge the partial demolition of a mosque in Delhi’s Jahangirpuri area. Appearing on his TV channel, Chopra had said, “The revenge of Jahangirpuri by attacking Mahadev. Please listen to me carefully what I am about to say.

“Is it such a big coincidence? Two days ago, a bulldozer was used on the premises of a mosque in Jahangirpuri and today three temples were demolished in Rajasthan’s Alwar. One temple was 300 years old. Was it to avenge Jahangirpuri?”

The Rajasthan High Court on Saturday said that no coercive action should be taken against Chopra. However, according to the Rajsthan Police, Chopra got repreive from the high court in relation to two FIRs registered against him in Bundi and Alwar districts. The police, according to news agency PTI, said that Chopra continues to face an arrest warrant following a local court order in Dungarpur district.

Chopra has been booked under sections 153 (Promoting enmity between different groups on grounds of religion, race, place of birth, residence, language, etc., and doing acts prejudicial to maintenance of harmony), 295 (Injuring or defiling place of worship with intent to insult the religion of any class), 295-A (Deliberate and malicious acts, intended to outrage reli­gious feelings), 120 B (Punishment of criminal conspiracy), 124 A (Sedition) and 67 (Imprisonment for non-payment of fine).