Cricket commentator Harsha Bhogle on Monday took to Twitter to slam Zee News for its ‘cringeworthy’ headline for Commonwealth gold-medalist Dipika Pallikal after she won two world doubles titles in Scotland. Faced with widespread outrage, Zee News was forced to change its headline. 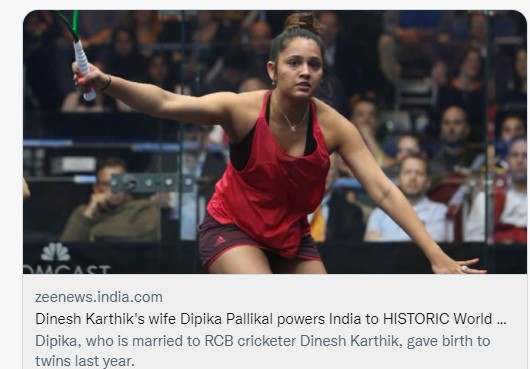 In its original headline, the Zee News website had referred to Dipika as cricketer Dinesh Karthik’s wife even though the squash player has achieved several international accolades in her own right. The controversial headline read, “Dinesh Karthik`s wife Dipika Pallikal powers India to HISTORIC World Doubles Squash Championships titles.”

Taking objection to the headline, Bhogle wrote, “Hey @ZeeNews do you want to change your headline? It isn’t fair to @DipikaPallikal who is a champion in her own right. I hope you will.” Another user wrote, “Can there be a more cringe-worthy headline than this? DK’s wife? Seriously??”

However, not everyone agreed with Bhogle as they felt that there was nothing wrong in addressing Dipika with her spouse’s name. One wrote, “Most people know DK..Few would have heard of DP. Therefore, the Headline is ok…It doesn’t take away her super achievement. And, Harsha, you often retweet Anita’s tweets…
Which just goes to show who is better known!”

“Though I agree that the headline is wrong but surely in a country where most people do not know the difference between tennis and badminton, know Deepika and squash only because of DK. This is unfortunate but also true,” commented another user.

Commonwealth gold-medalist Dipika Pallikal on Saturday created history by winning two doubles world titles for India. Dipika teamed up with brother-in-law Saurav Ghosal in the mixed doubles event and Joshna Chinappa in the women’s doubles to win both the titles. Her achievement at the World Doubles Championships in Glasgow, Scotland assumed significance since they came within months of she giving birth to twins. Her victory is also great news for India ahead of this year’s Commonwealth Games, scheduled to be held in Birmingham, England.