Remember the viral of Arnab Goswami saying mujhe drugs do (Give me drugs)! That has come to haunt the Republic TV founder as Kapil Sharma, Kiku Sharda and Krushna Abhishek recreated that scene with mujhe jug do (Give ma a jug) jibe on The Kapil Sharma Show. While mocking Goswami, these comedians called their news channel Raddi News, which loosely translates as Garbage News. 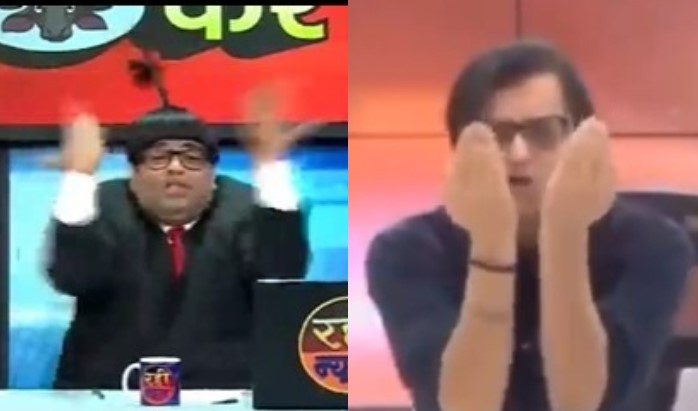 In the video shared by Kapil, his co-star Kiku Sharda was heard saying, “Welcome to Raddi News and I am Bachcha Yadav.” When Kiku asked for his guests namely Bollywood actor Manoj Bajpayee and filmmaker Anubhav Sinha, Krushna Abhishek replied, “The milkman did not come today.”

This sent Kiku into hysteria as he mimicked Goswami by shouting, “Breaking news. Our milkman has not arrived. Breaking news. Doodh waala saamne aao, kahan chhipe baithe ho. (Come out in the open milkman. Where are you hiding?)

Launching an extraordinary rant against Salman Khan, the Republic TV founder had recently said, “Where’s that Salman, who used to talk so much? Where is he hiding? Why does he not raise a single voice against the drugs mafia? … I am asking this question by naming Salman Khan. Where are you, Salman Khan? Not a single statement or tweet. Why are you silent on the entire episode of Disha Salian? Why are you silent on the murder of Sushant (Singh Rajput)? Which city are you in Salman? Which country are you in Salman? You are a person, who speaks against the pulse of the nation. You will read the dialogues of Bigg Boss when they are written for you by others.”

Little later into the programme, Kiku asked Krushna for a glass of water. To which replied, “We donlt have glass. We have a jug.” Once again, Kiku became hysterical as he brilliantly mimicked Goswami by yelling, “Mujhe jug do, mujhe jug do.”

Not too long ago, a video of Goswami hysterically asking mujhe drug do had gone viral on social media platforms.

The Kapil Sharma Show is produced by Salman Khan. Reacting to the video, one fan wrote, “Arnab Goswami will die of shame after watching this. “Arnab roasted,” wrote another fan. Another commented, “Arnab Goswami’s mimicry.”