Janta Ka Reporter 2.0
Home Entertainment “Even I have been victim of nepotism”: Saif Ali Khan stirs up...

Saif Ali Khan has stirred up a hornet’s nest after claiming that he himself has been a victim of nepotism in its ‘purest form.’ His comments came just days after the story on Rohit Shetty’s claims that Saif’s daughter Sara Ali Khan begged for a role in Simmba went viral. However, Saif’s claim did not go down well with fans, who also appeared incensed on the actor’s support to Karan Johar on the thorny issue of nepotism in the wake of Sushant Singh Rajput’s tragic suicide. 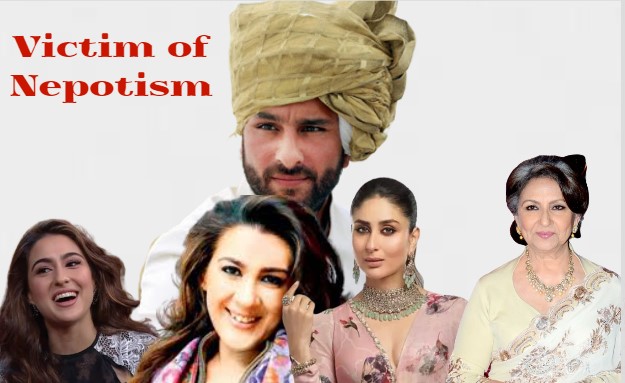 Speaking to a newspaper during a webinar, Saif slammed Kangana Ranaut for criticising Karan Johar for promoting nepotism when she made an appearance on the latter’s TV show Koffee With Karan.

Speaking about nepotism in Bollywood, Saif told New Indian Express that he himself has been a victim of nepotism as he was once denied a role after ‘somebody’s Dad’ called the producer to cast his son instead. “Nepotism in its purest form is something that even I have been a victim of. But nobody’s interested in that. Businesses work like that. I am not going to take names but somebody’s dad has rung up and said don’t take him, take him in the movie. All that happens and it has happened to me. There is inequality in India that needs to be explored. Nepotism, favoritism and camps are different subjects.” Saif said.

Recently, an old interview of Rohit Shetty claiming that Sara Ali Khan begging for a role in Simmba made him cry had gone viral. Speaking on The Kapil Sharma Show, Rohit Shetty had said, “This girl sent me a message saying that she wanted to work with me…She sent me 15-20 text messages. So, I replied to Sara and asked her to come to my office. I thought she is the daughter of Saif Ali Khan and Amrita Singh. She will have 4-5 bodyguards. There will be 3-4 managers. And those managers will also have managers. There will be boys and those boys will have their own boys.”

Rohit had continued, “I think my chief AD Sneha was there. I asked her who is Sara accompanied by. She told me that she has come alone. I wondered why she has come alone. I asked her come inside the office. After that, this girl literally, I can reveal now that she has become a star. She folded her hands and began to desperately ask, ‘Sir please give me work.’ And don’t forget that she was Saif Ali Khan’s daughter.”

Rohit had revealed that Sara’s gesture had made him cry.

Reacting to the issue of nepotism and Kangana Ranaut’s criticism for Karan Johar on his show Koffee With Karan, Saif said, “I have no idea what Kangana was saying on Koffee with Karan because I don’t think like that. I mean if you come on to a show and if you’ve got an agenda prepared to take the host down, my mind doesn’t work like that. I don’t understand. So I was a little surprised obviously. But these issues have absolutely nothing to do with me and I tend to find myself in the middle of them. Maybe I should think sometimes before commenting.”

Saif’s mother Sharmila Tagore has been one of the most popular Bollywood actresses. His first wife Amrita Singh has been an acclaimed actress. The actor is married to actress Kareena Kapoor Khan, who hails from the legendary Raj Kapoor family in Bollywood. His daughter has already acted two hit film namely Kedarnath and Simmba.

The issue of nepotism has become a dominating topic of intense discussions after the death of Sushant Singh Rajput. Many believe that Sushant was forced to end his life because he was stopped from growing in Bollywood by ‘insiders’ with links powerful banners despite acting in several hit films.