Bharti Singh of The Kapil Sharma Show has received an extraordinary show of support from co-star Krushna Abhishek after several reports claimed that the laughter queen from Punjab had been sacked from the Salman Khan-produced show following her arrest in the drugs racket case. Meanwhile, Kiku Sharda, who plays Bharti’s on-screen husband on the show, has issued clarification rubbishing rumours of her removal from the popular comedy show. Bharti’s arrest was widely linked to the mocking of Arnab Goswami on the comedy show. 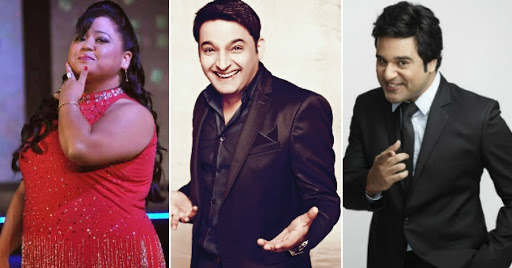 What triggered the rumour mill to go into a frenzy was Bharti’s absence from the show over the week when Shakti Kapoor and Chunky Pandey were the guests. Many felt that the Salman Khan-produced show had dropped the comedian from Amritsar after her arrest with her husband Haarsh Limbachiyaa.

However, Kiku told Bombay Times, “We shot yesterday, and she wasn’t there at the shoot. But that’s quite normal as she doesn’t shoot with us for every episode. In fact, I haven’t heard of any talk of her not being a part of the show. She just wasn’t there yesterday at the shoot and that’s about it.”

Much to Bharti’s comfort, Krushna said that he stood by his co-star, adding that the former also enjoyed the support of Kapil Sharma. “Even if something like this happens, I will support Bharti. She should get back to work. Jo ho gaya woh ho gaya (Whatever has happened, has happened). We stand by Bharti and both Kapil (Sharma) and I are with her. She has my unconditional support,” Krushna was quoted as saying.

The Narcotics Control Bureau had arrested comedian Bharti Singh of The Kapil Sharma Show in a drug racket case after grilling her and husband Haarsh Limbachiyaa earlier this month. They were sent to judicial remand till 2 December, but they managed to get the bail within two days of their arrest. Many had detected a direct link between Bharti’s arrest and the public mocking of Arnab Goswami by her on-screen husband Kiku Sharda on The Kapil Sharma Show.