Food delivery mobile app Swiggy has joined the debate over the farmers’ protests with a brutal potshot at those opposing a peaceful march against the controversial Farm Laws passed by the central government. While thousands of farmers have gathered near the Delhi-Haryana border after marching towards Delhi for several days, BJP supporters on social media and inside TV studios have made desperate attempts to vilify those taking part in an unprecedented protest movement. 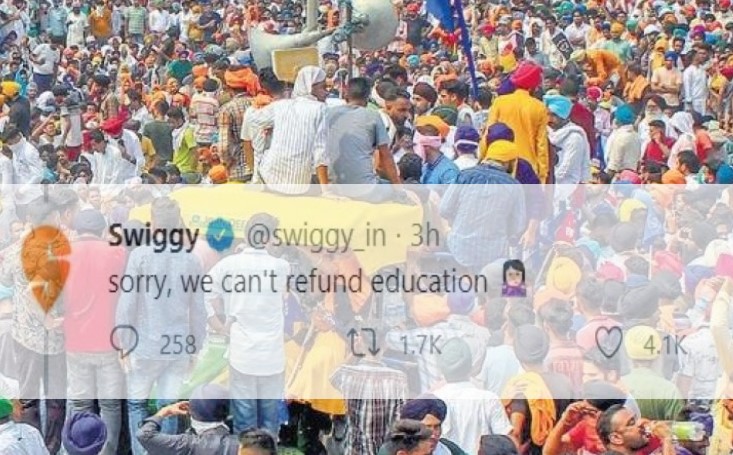 One Twitter user wrote, “Had an argument with my Bhakt friend over farmers protest. He said that we are not dependent on farmers for food. We can always order food from Swiggy. He won.”

The quirky response by Swiggy is won hearts on the microblogging site. One wrote, “Lol, now Bhakts will trend boycott swiggy.” Another tweeted, “What a lovely tweet, @swiggy_in. We love you for this! You can’t refund education, but you sure can #DefundTheHate. Reconsider your decision to advertise on @ZeeNews that does this to our farmers in the name of news.” “Ouch! Good one, @swiggy_in,” wrote another Twitter user.

Thousands of farmers have assembled near the Delhi-Haryana border protesting against the Farm Laws passed by the central government. Meanwhile, Prime Minister Narendra Modi said in Varanasi that the ‘new agricultural laws have been brought in for benefit of the farmers’ adding that Indians will ‘see and experience benefits of these new laws in the coming days.’