Comedienne Bharti Singh of The Kapil Sharma Show pulled off the perfect revenge from husband Haarsh Limbachiyaa on the show of India’s Best Dancer reality show on Sunday night as she expressed her desire to marry choreographer Terrance Lewis. This came just days after the Punjab and Haryana High Court provided her interim relief from coercive action along with director-choreographer Farah Khan and actress Raveena Tandon. 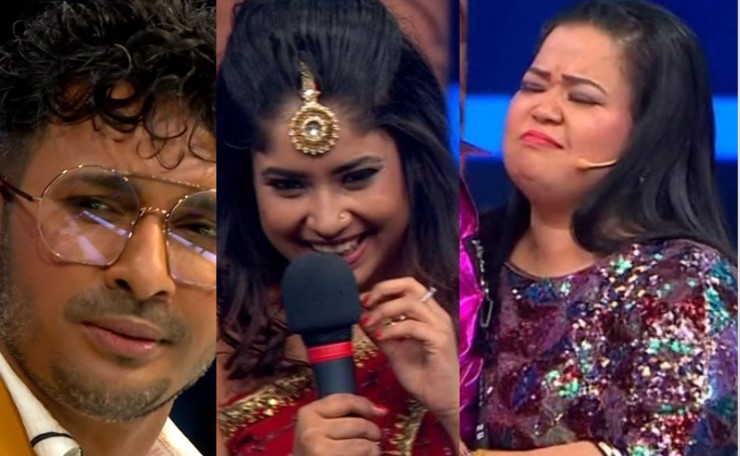 Terence Lewis was asked by fellow judge Geeta Kapoor about his ideal girl, who could become his wife. To which, Lewis said that he preferred a beautiful and well-mannered girl as his potential wife.

He continued, “She should be a little cute and bubbly. One thing, which is very essential in my relationship is the sense of humour. Because I don’t have that. I would want that she makes me laugh.”

No sooner did he complete his sentence, Bharti was seen growing impatient in frustration. She pretended to cry prompting Geeta Kapoor to ask for the reason of her discomfort. Bharti said, “Could you not have explained these (qualities) things quicker. Had you said this a few years earlier, I would have been Mrs. Lewis today.”

Bharti’s husband Haarsh Limbachiyaa disagreed as he said, “Lewis surname doesn’t suit you well.” Bharti replied sarcastically while making fun of his surname Limbachiyaa, “As if Limbachiyaa suits me any better. ‘Hi Mrs. Lewis’ makes me feel like someone from the kitty party. Hi my name is Mrs. Lewis.”

Bharti and a female dance contestant were asked to impress Lewis with their dance performance. Lewis was so impressed by Bharti’s dance that he said that it would have been his pleasure to marry Bharti had she not been a married woman.

Bharti and Haarsh are the hosts of Sony TV’s India’s Best Dancer. Both have recently been seen on rival Colors TV after both made guest appearances to cause laughter riots. Haarsh was seen flirting with Karishma Tanna prompting Bharti to flirt with Rohit Shetty in a bid to pull off the perfect revenge.

Earlier this month, a video of Bharti Singh leaving Archana and Kapil speechless with her funny one-liners had gone viral after Sony TV shared it on Instagram. In the video, Bharti had cracked a joke targeting Archana. As finally revealed by Archana, that joke too may have been scripted at the behest of Kukreti, the show’s director.

Last month, a man in Maharashtra had demanded the immediate arrest of Bharti, Raveena Tandon and Farah Khan for hurting the religious sentiments of the Christian community. Ashish Shinde had written to the Director-General of Police of Maharashtra demanding the arrest of the Bollywood actress, dance-director and the famous comedienne.