It seems like new housemate Arshi Khan has become the new Himanshi Khurana aka Punjab’s Aishwarya Rai in this season of Bigg Boss after Salman Khan lashes out at the model and vows to never speak to her. This was seen in the new promotional video broadcast by Colors TV. 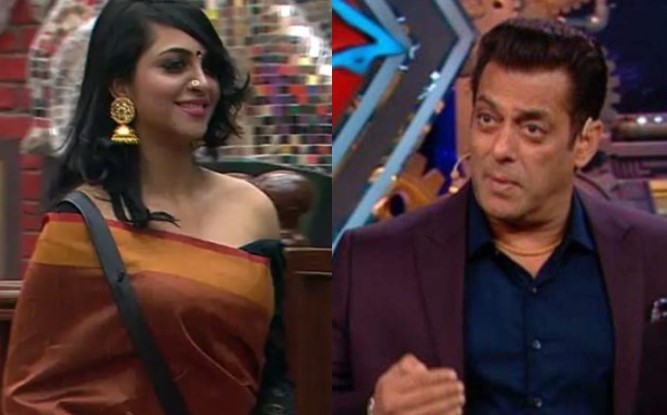 In the video, a furious Salman is seen lashing out at Arshi Khan for her alleged ill-mannered behaviour towards other fellow conetstants. In one clip, Arshi can be seen saying, “Main dimagh se soch kar aayi thi aap mujhe zillat ke laddu khilwakar rahenge. (Today, I had come mentally prepared that you will subject me to insults).”

Salman warns her to never accuse him of planning to insult her. A visibly seething Salman tells Arshi, “Arshi maine aisi kaun si aap se baat ki ho (Arshi, when did I speak to you like this?)” Arshi says that she was merely joking, prompting the Bigg Boss host to say, “Aisa mazaq mujhe pasand nahi hai. (I don’t like such jokes).”

Salman then vows to never speak to Arshi as he says, “Arshi aap ko koi haq nahi banta. behtar hoga ki main aap se baat hi na karoon. (Arshi you have no right. It would be better if I never speak to you).”

Arshi had entered the house with three other former Bigg Boss contestants. Also joining her are Vikas Gupta, Rakhi Sawant, Manu Punjabi and Kashmera Shah. While inside the house, Arshi has been seen locking horns with Vikas Gupta. On Thursday night, she refused to wear her mic threatening to walk out of the show if Bigg Boss did not explain to her if Vikas indeed had been empowered with privileged information about the show’s format.

In the next episode of Weekend Ka Vaar episode, Salman will also be seen lashing out at Kavita Kaushik’s husband Ronnit for sharing details about her alleged phone conversation with Anubhav Shukla.

In the last edition of Bigg Boss, Salman was seen repeatedly insulting Himanshi Khurana, who had identified herself as Punjab’s Aishwarya Rai. She went on to fall in love with Asim Riaz, the first runner-up of that season.