Salman Khan will be seen losing his cool at FIR actor Kavita Kaushik, her husband Ronnit, Bigg Boss contestants Abhinav Shukla and his wife Rubina Dilaik for their public spat. This was after Ronnit’s decision to accuse Abhinav of harassing his wife Kavita in the past became a topic of intense discussion inside the Bigg Boss house on Friday. A promo broadcast by Colors TV showed Salman Khan term their public spat as ‘sick.’ 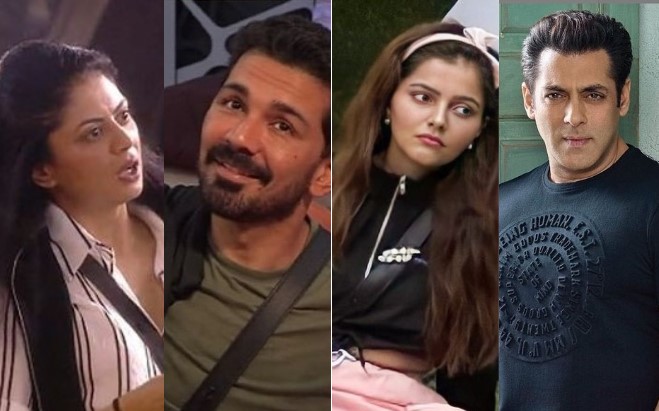 This quarrel starts with Kavita making stunning allegations against Abhinav as she says, “Aap ne kayee martaba mujhe violent nature ke messages bheje the aur maine aap ko dhamki bhi di thi ki ye band kar dein warna ab mujhe police ki madad leni padegi. (You sent me violent messages on many occasions and I had even warned you to stop it saying that I will be forced to seek police help).”

Abhinav, who has repeatedly denied ever harassing Kavita with messages, says in the video, “I would love to see those messages. We will deal in a legal fashion.” Earlier, Vikas had told Abhinav how Ronnit made extraordinary allegations against him outside the house, accusing him of being an alcoholic and harassing his wife. This had prompted Abhinav to share the development with his wife Rubina. Both of them had even contemplated pursuing the matter legally against Kavita and her husband.

A visibly angry Salman is then saying to Ronnit, “Aap ko koi haq nahi banta ki you need to get her life out in the open. What have you done to her?” Then addressing everyone, Salman says, “Ye khilwad bana ke rakha hai. Ye ganda hai ye. (You have made a mockery of this. This is getting sick).”