Rajdeep Sardesai has launched an unprecedented attack on Arnab Goswami by accusing him of running a ‘Banana Republic channel’ days after Kiku Sharda and Krushna Abhishek of The Kapil Sharma Show brutally roasted the Republic TV founder for his recent on-air rant targeting Salman Khan. 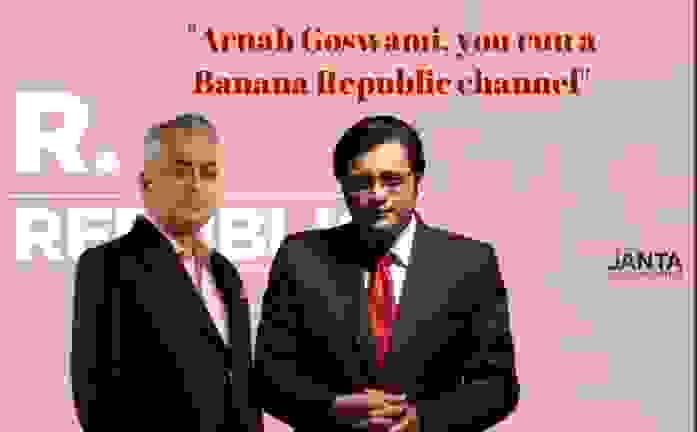 Sardesai lost his cool during his broadcast on India Today TV channel as he said, “Today I am going to say, ‘Arnab Goswami, you run a Banana Republic channel. You run a channel that has deliberately created a media trial for whatever your ends are. But do not bring journalism down to the level that you have. This is the only advice that I will give you. This is not what journalism is about. You want me to name and shame, I will name and shame today because I have kept quiet for two and half months and listened to the crap that you’ve put out on air with only one purpose you had- to try and get rating points. There’s something more than TRP my friend. It’s called Television Respect Points.”

#ArrestArnabGoswami #DoctorJudgeArnab #ArnabGoswami #ShameOnRepublicJourno there is somebody who can call spade a spade, Thankyou #RajdeepSerdesai for naming and shaming this clown, somebody has to do it,he shouldn’t be allowed further to degrade Indian journalism. pic.twitter.com/wybpKW42Dj

Goswami had attacked Sardesai, his former boss at NDTV, after the latter secured an exclusive interview with actress Rhea Chakraborty. Goswami, who’s been claiming that Sushant Singh Rajput was murdered, was left disappointed recently after an AIIMS panel concluded that the 34-year-old actor from Bihar had committed suicide. “Sushant’s death is a case of suicide. Murder completely ruled out,” Dr Sudhir Gupta was quoted by India Today.

Frustrated by the findings of the AIIMS panel, Goswami had decided to make public the content of a telephonic conversation between one of his colleagues and Dr. Sudhir Gupta from the premier medical institute.

Goswami had to face brutal roasting by the cast of The Kapil Sharma Show over the weekend as Kiku Sharda and Krushna Abhishek mocked the controversial anchor and his colleague Pradeep Bhandari.