Hours after Bollywood singer Kanika Kapoor courted controversy for hiding her travel history despite testing positive for coronavirus, Arnab Goswami decided to name and shame Shahid Kapoor and his wife Mira Rajput for their ‘irresponsible’ act. Goswami’s public outbursts targeting Shahid and Mira came days after the celebrity couple was accused of using a gym in Bandra despite a government ban. 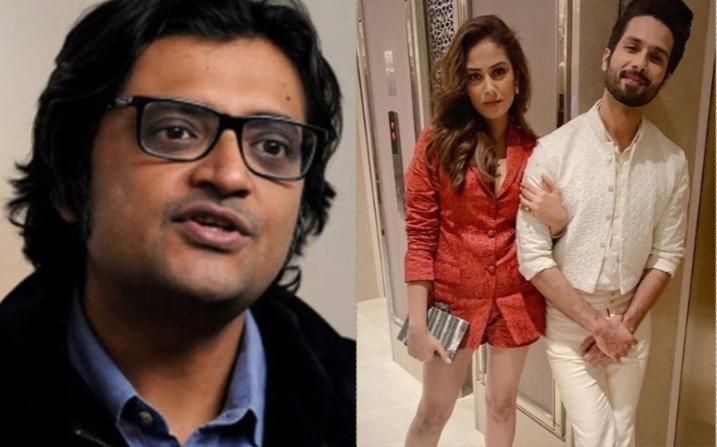 Goswami started his debate with his usual rant as he said, “The prime minister yesterday spoke of sanyam and sankalp. That’s restraint and resolve when it comes to the national battle against coronavirus. Given the way in which the news has broken through the day of a Bollywood singer, who partied with hundreds of people and has now tested corona positive, I guess another word could have been added to restraint and resolve, another R. That’s responsibility.”

He continued, “Bollywood must understand that responsibility goes far beyond putting out that occasional tweet…We find so many of the big shot in Bollywood who are now tweeting to say ‘Oh we support Prime Minister Narendra Modi,’ who till recently have been partying like there was no tomorrow. One of them openly broke the rule of social distancing by using his connection to open a gymnasium in Mumbai.”

“These filmstars, these politicians. It’s the mindset that is coming to play, isn’t it?”

Actor Shahid Kapoor and Mira Rajput had found themselves embroiled in the coronavirus controversy last week after authorities accused the couple of posing a risk to public safety. Worse, both Shahid and Mira were reprimanded for their ‘irresponsible behaviour.’

This was after the Kabir Singh actor and his wife were found to be working out at a gym in Bandra where the civic authorities have imposed a ban on gyms following the outbreak of coronavirus. Of the three deaths reported from India so far, one has died in Mumbai.

On the work front, Shahid is currently shooting for Jersey, where he will be seen playing the character of a cricketer. Directed by Gowtam Tinnanuri, the film is a Hindi remake of the Telugu film Jersey.