BJP’s Rajya Sabha MP Subramanian has offered a radical solution to the ongoing crisis in Sri Lanka terming it as ‘Libya in our neighbourhood.’ Swamy said that India must send its army to ‘restore constitutional sanity’ on the island nation with a swipe at Sonia Gandhi for forgiving the killer of Rajiv Gandhi. 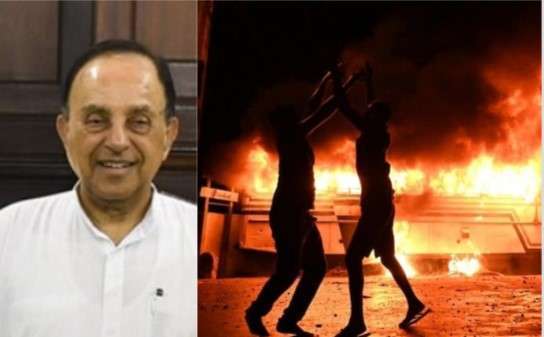 The last time India sent the army to Sri Lanka was in the 80s when Rajiv Gandhi was the country’s prime minister. This led to Gandhi’s assassination by LTTE terrorists in 1991.

Swamy appeared to take a potshot at Sonia Gandhi by saying that Rajiv Gandhi’s widow now wants to forgive her husband’s killer, Nalini.

Sri Lanka has slipped into utter lawlessness after peaceful protesters turned violent this week after being attacked by the supporters of the government. They burned houses belonging to ministers, prompting Mahinda Rajapaksa to resign as the country’s prime minister. One MP was killed in the violence.

Swamy said that those resorting to violence did not deserve any mercy. “Burning down the residences even of the Prime Minister, shooting dead MPs by mobs means rioters don’t deserve any mercy. We cannot allow another Libya in our neighbourhood,” the outspoken BJP politician wrote on Twitter.

Meanwhile, several former Sri Lankan cricketers have urged people to refrain from violence even as they extended their support to those holding protests against the economic crisis in the country.