British Prime Minister Boris Johnson is facing widespread public ridicule after he confused India’s farmers’ protests with its conflict with Pakistan. Johnson made the embarrassing gaffe while answering a question from an MP inside the British parliament. 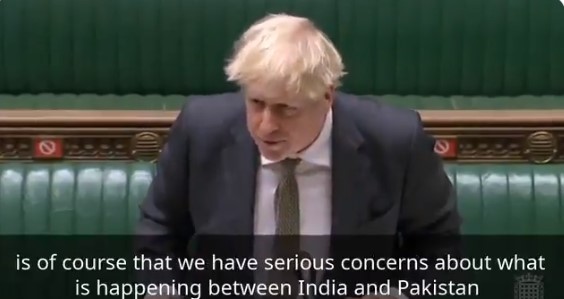 British Labour MP Tanmanjeet Singh Dhesi had asked Johnson to comment on the ongoing farmers’ protests in India during the weekly Prime Minister’s Questions. Dhesi, who was recently instrumental in writing a joint-letter to the British Foreign Secretary Dominic Raab along with 35 other parliamentarians, said during the weekly PMQ, “Many constituents, especially those emanating from Punjab and other parts of India, and I were horrified to see footage of water cannons, teargas and brute force being used against peacefully protesting farmers.”

Addressing Johnson, Dhesi had asked, “So, will the prime minister convey to the Indian prime minister our heartfelt anxieties, our hopes for a speedy resolution to the current deadlock, and does he agree that everyone has a fundamental right to peaceful protest?”

Johnson’s response left everyone including Dhesi shocked. The British prime minister replied, “Our view is that of course we have serious concerns about what is happening between India and Pakistan but these are pre-eminently matters for those two governments to settle.”

A visibly shocked Dhesi took to Twitter to share the video of his exchange with Johnson as he wrote, “Many were horrified to see water cannon, tear gas and brute force being used against farmers peacefully protesting in India about #FarmersBill2020. Everyone has the fundamental right to protest peacefully. But it might help if our PM actually knew what he was talking about!”

Many were horrified to see water cannon, tear gas and brute force being used against farmers peacefully protesting in India about #FarmersBill2020.

Everyone has the fundamental right to protest peacefully.

But it might help if our PM actually knew what he was talking about! pic.twitter.com/EvqGHMhW0Y

No sooner did Dhesi share the video of Johnson’s embarrassing gaffe, the British PM began to face ridicule for his ignorance. Labour MP Priti Kaur Gill tweeted, “The incompetence from this Govt continues. The foreign sec @DominicRaab has failed to brief the PM on one of the largest protests the world has seen. 250million peacefully protesting in India against draconian laws.”

One user wrote, “How is this guy our PM???!! @TanDhesi brought up what’s happening to our farmers and this is Boris’ reply. Is he for real??” Another commented, “A clueless Boris Johnson embarrasses himself in the UK parliament while responding to @TanDhesi’s concerns about India’s action against protesting farmers.”

As many as 36 British cross-party parliamentarians had recently written a letter to Foreign Secretary Dominic Raab requesting for the UK’s intervention in the ongoing farmers’ protest in India. Some of the notable signatories of the two-page letter include British Sikh Labour MP Tanmanjeet Singh Dhesi, Labour MPs Khalid Mahmood, Virendra Sharma, Seema Malhotra and Valerie Vaz as well as former Labour Leader Jeremy Corbyn.