Remember the hue and cry over Justice DY Chandrachud’s famous lines while granting bail to Arnab Goswami in the abetment to suicide case! Justice Chandrachud had said that although he did not watch Republic TV founded by Goswami he needed to safeguard the personal liberty of an individual. That famous line drew sharp criticism from many, who reminded the top court why it had not maintained the same stance in cases involving other journalists currently in jail for carrying out their duties as journalists. Justice Chandrachud’s order dominated social media conversations on Wednesday when the Indian Air Force ordered censorship to Netflix film AK vs AK starring Anil Kapoor and Anurag Kashyap. 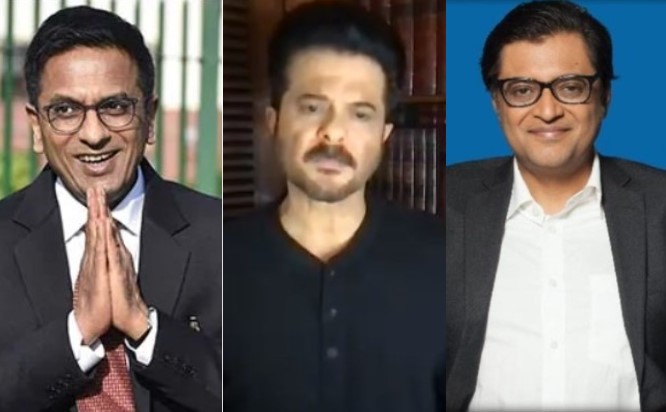 Hours later, Anil Kapoor issued a public apology while explaining the context of his character donned in the Air Force officer’s uniform in the film. He said, “It has come to my attention that the trailer of my new film “AK vs AK” has offended some people. As I am wearing the Indian Air Force Uniform while using unparliamentary language, I would like to sincerely offer my humble apologies for unintentionally hurting sentiments.”

Anil then explained, “My character in the film is in uniform because he’s an actor playing the role of an officer. When he finds out that his daughter has been kidnapped, the anger and rage that he experiences and portrays is that of an emotionally distraught father.”

No sooner did Anil share his video, his fans began to invoke the line from Justice Chandrachud’s order on Arnab Goswami to urge the Indian Air Force to exercise tolerance.

Still just a video made for entertainment purposes only. We know they don’t represent any of the clothing they’ve worn. Or as Justice Chandrachud said last month – don’t like it don’t watch it. https://t.co/33y2uG78aZ

Maybe Justice Chandrachud could help you with this. #AKvsAK pic.twitter.com/76repbONDe

Justice Chandrachud – If you don’t like a movie then don’t watch it.

Also, if you have such a problem with the movie, there’s a simple solution to it that has been provided by Justice Chandrachud: DON’T LOOK AT IT.

While granting bail to Arnab Goswami, Justice Chandrachud had said, “Whatever be his ideology, lest I don’t even watch his channel but if in THIS case, constitutional courts do not interfere today – we are traveling the path of destruction undeniably.”

The Indian Air Force on Wednesday had ordered extraordinary censorship of the film that to over Twitter. It had to face public condemnation with many asking if India had turned into a military dictatorship. The IAF has not reacted to its extraordinary diktat as yet.