Jonny Bairstow on Tuesday hit England’s second-fastest Test century as hosts beat New Zealand in a thrilling encounter at Trent Bridge in the second Test of the series. Needing 299 runs to win, England achieved the target in just 50 overs. England won the Test by five wickets with 20 overs to spare. 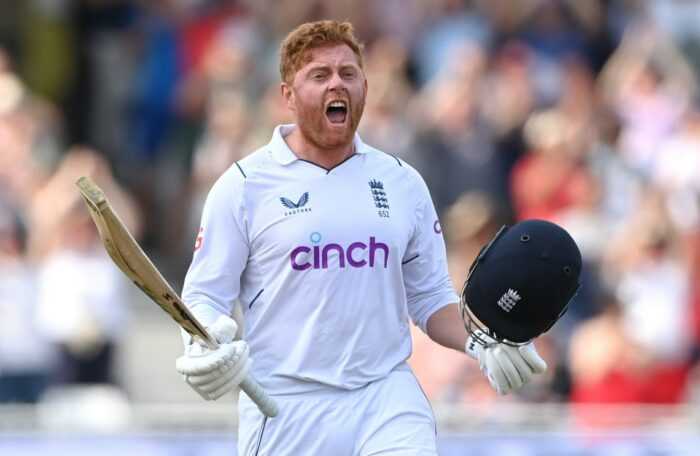 Bairstow entertained the crowd by completing his century in just 77 balls as he narrowly missed the record of scoring the fastest-ever Test century by an English player. The fastest Test century by an English player is held by Gilbert Jessop, who took 76 balls to score his hundred against Australia at the Oval in 1902. Bairstow completed his century from 77 balls. He was eventually out for 136 from 92 balls, but England had almost won the match by the time he departed.

Skipper Ben Stokes made 75 from just 70 balls. This was a remarkable victory given that England were reduced to 93-4 after Lees, Pope and Root departed early in the innings.

Batting first, New Zealand had made in the first innings 553t. England posted 539 in their first innings before bowling the Kiwis out for 284 in their second innings.

Former England skipper Michael Vaughan told the BBC after the match, “It’s amazing how you can change mentality quickly. McCullum has to deserve a huge amount of credit. He’s told them to go out and activate the game when they bat. Be busy. Be positive. Look to score. Watch the way Lees played in the Caribbean to how he played today. He looks a totally different player. Baz McCullum deserves credit.”

Bairstow was declared Man Of The Match for his magical knock.