Indian fans have erupted in anger and called the chair umpire ‘racist’ after an ‘unfair’ penalty by the latter cost PV Sindhu a place in the final of the Badminton Asia Championships. The video of Sindhu engaged in a heated argument with the match officials while protesting over the ‘unfair’ penalty has gone viral now. 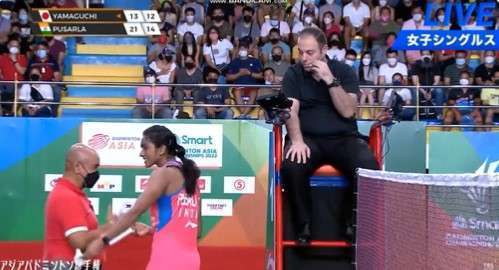 The penalty left Sindhu shocked as she lodged strong protests. This prompted a match official to intervene but the penalty was not reversed despite protests by Sindhu. Sindhu eventually lost her match against World No. 2 21-13, 19-21, 16-21.

The Indian star did not mince words after the match as she slammed the chief referee, who she said she had informed about the incident.

Speaking after the match, Sindhu said that the umpire told her she was taking a lot of time but, according to her, Akane Yamaguchi wasn’t ready at that point.

She said, “But the umpire suddenly gave her the point and it was really unfair. I think that was one of the reasons why I lost. I mean that is my feeling because at that moment it was 14-11 and could have become 15-11 but instead it became 14-12 and she took continuous points. And I think it was very unfair. Maybe I would have won the match and played in the final.

PV Sindhu didn't hold back in her post-match interaction. "Totally unfair on the umpire's part," she says for asking her to hand over the serve to Akane Yamaguchi at 14-11 for apparent delay. #BAC2022

“I told the chief referee. He said it’s already done. I think as a chief referee he needs to make sure what was the mistake done, or he should have seen the replay and done something about it.”

The development left Indian fans seething in anger as they accused the umpire of being racist. However, others felt that Sindhu was a habitual offender and had been warned about taking too much time even in the past.

PV Sindhu you are a Queen and will always be?. You just lost coz of that biased and racist umpire. Congratulations for bronze but you are a gold medallist for us❤️?. #BAC2022 pic.twitter.com/rVpPHPSNM9

Sindhu is habitual in taking extra time to resume game and here she tried to be slightly clever but got it all wrong. Had she been little cool like Dhoni it was her match.

Even if she voices her opinion, it will not matter at all because the umpire has already stuck with her own opinion. No one can win against the umpire if the umpire says so. This is a completely erroneous call by the umpire, and it is not Akane's fault.

First of all there is no delay. The opponent was not ready. Before awarding point to opponent, Sindhu should have shown Yellow card first, which is also wrong in this case.

Sindhu does take more time than the others…and has been warned on several occasions…she gets tired ; disoriented and needs that extra few seconds..