BJP leader Ram Madhav recently faced intense grilling from a BBC presenter on a host of issues including Subramanian Swamy’s ‘Muslims not equal’ comments, Kapil Mishra’s communal tweets and Home Minister Amit Shah’s ‘termites’ jibe aimed at Muslim immigrants from Bangladesh. Madhav, who is accustomed to being treated with kid-gloves by pro-BJP TV anchors in India, found the going tough in the face of hard-hitting questions. 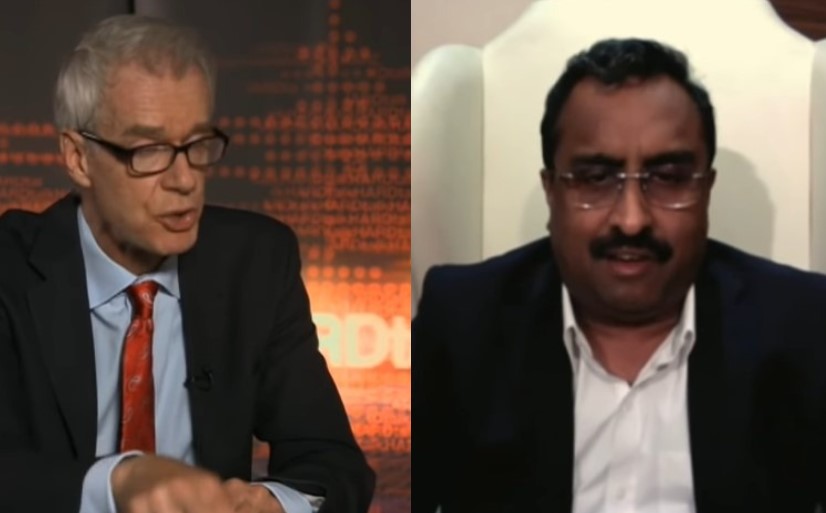 Madhav rejected the allegations that the BJP government headed by Prime Minister Narendra Modi had used the coronavirus pandemic lockdown to go after the Muslim community. This prompted the BBC host to tell Madhav that he was living in a parallel universe of his own.

Sackur said, “Are you not aware that just last month the BJP MP, Subramanian Swamy, said, ‘Muslims if they become anything like 30% of our population, they will be a danger to the country.’ Muslims, he said, are not in an equal category. This is the language of pure discrimination and coming from senior figures in your party.”

A visibly embarrassed Madhav replied unconvincingly, “Ok, I have not seen the statement directly. I take it that what you are saying is true. You be careful that if it is not true, you will be sued by Dr. Swamy. Having said that, we do not approve of such sentiments.”

In April this year, Swamy was asked by a journalist if the newly enacted Citizenship Amendment Act violated Article 14 of the Indian constitution, which guaranteed equal rights to Indian citizens regardless of their religious background. Swamy had replied, “I can tell you that’s the misinterpretation of Article 14. Article 14 guarantees equality for equals.”

When the anchor challenged him asking if all people were not equal, Subramanian Swamy had replied with a straight face, “All people are not equal.” He had added, “There’s no such thing called equal rights. They are not in equal category.”

This had prompted Twitterati to remind the BJP parliamentarian that his own journalist daughter was married to a Muslim.

The BBC HARDtalk host then asked Madhav to explain about Home Minister Amit Shah’s statement calling Muslim immigrants from Bangladesh ‘termites.’ He asked, “If you are so sure that there is no racism, deep discrimination, communal hate at the heart of your party and movement’s ideology, how do you react when your own Home Minister Amit Shah describes migrants from Muslim majority Bangladesh living in India as ‘termites’ who will be thrown into the Bay of Bengal? It’s the classic techniques of ‘othering’ and dehumanising those you regard as second class. How do you react to it yourself?”

Madhav said that Shah’s comments had been taken out of context prompting the BBC host to ask what would be the right context to term even illegal Muslim immigrants ‘termites.’

Sackur then turned his focus to the communal statements made by BJP leader Kapil Mishra, whose provocative remarks allegedly led to the violent anti-Muslim pogrom in Delhi this year when 53 people, mostly Muslims, lost their lives. He asked, “So what has happened to Kapil Mishra for example, who is known for his intemperate language, who tweeted, ‘These people from the Tablighi Jamaat have begun spitting at doctors and other health workers. It is clear that the aim of these people is to infect as many people as possible with coronavirus and kill them.’ He’s referred to them as coronavirus terrorists and he means Muslims.”

Madhav replied, “All such statements are wrong we’ve condemned them. We’ve cautioned and warned such functionaries if they are indulging in such statements.”

Contrary to Madhav’s claims, Mishra has never been reprimanded for any of his communally charged tweets aimed at causing religious enmity.