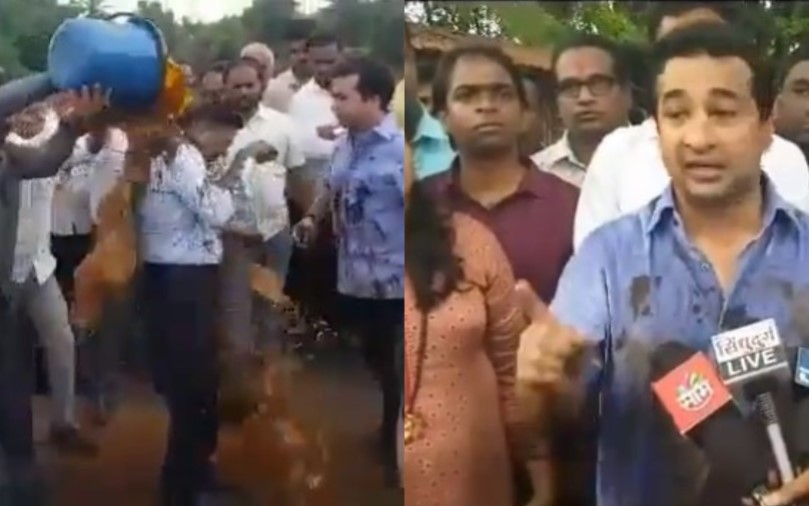 Quoting Dikshit Gedam, SP, Sindhudurg, the news agency reported that Rane and two of his supporters had been arrested and search for other accused was on. They will be produced in the court tomorrow

This was after police said that they were looking for Rane, son of former Maharashtra Chief Minister Narayan Rane, after he was caught on camera throwing mud with slime on an engineer on the Mumbai-Goa highway.

Rane was there reportedly to carry out an inspection of potholes on the highway during the rainy season. He was also being accompanied by Kankavli Municipal Council President and activists of the NDA-affiliated Maharashtra Swabhiman Party (MSP).

@NiteshNRane again!!
humiliated government employee, threatned & poured bucket full of wet mud on him. He & his karyakartas were unhappy with the remaining road work. Is it the only way left to get work done from gov staff????
reports @Aruneel_S pic.twitter.com/xWnz2nhZbO

They took the engineer to task for the bad condition of roads and how it was causing inconvenience to commuters during the rainy season. In the video, a companion of Rane is seen pouring bucket loads of mud and slime on the engineer before they allegedly tied him to the bridge.

Rane’s criminal act of assaulting a public servant comes just days after a BJP MLA in Madhya Pradesh was caught on camera hitting a civic body official using a cricket bat. He was later arrested and sent to jail. Prime Minister Narendra Modi had expressed his disgust and demanded his expulsion from the party.