A group of BJP workers on Tuesday made desperate attempts to disrupt a road show by the Congress party in Bengaluru, but they were soon chased away. This was on the last day of the campaigning in Bangalore Central’s Cottonpet area, where Karnataka Congress Pradesh Committee President was campaigning for the local candidate Rizwan Arshad. 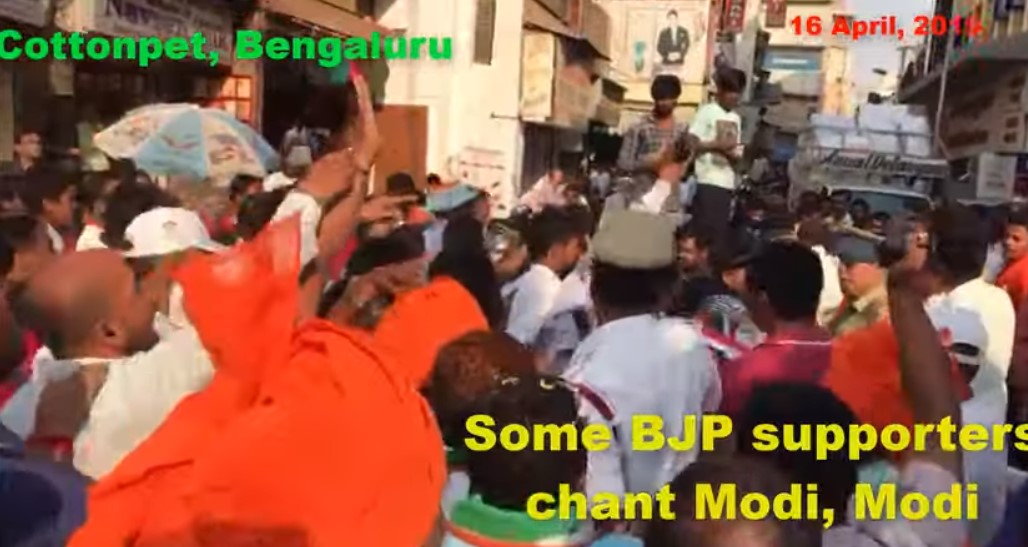 Around 4.30 pm, a group of unruly BJP workers arrived from nowhere and began chanting ‘Modi, Modi’ just when Rao had begun addressing a local crowd. The act infuriated the Congress workers, who decided to go after their rival with counter slogan such as Chowkidar Chor Hai and Rahul, Rahul. Thanks to the huge presence of police, the two rival groups were separated.

Rao, who is also the local MLA, appealed to his supporters to not pay heed to the provocation by the BJP workers. But this had a very little impact on them as they appeared visibly angry by the BJP supporters’ decision to disrupt their peaceful campaign activity.

Although, the BJP workers disappeared, but they arrived in bigger numbers by holding their party flags. Before the situation could spiral out of control, cops intervened and stopped the BJP workers from proceeding towards the place, where Rao was still addressing the crowd.

Sensing the trouble, Rao wound up his speech, allowing his supporters to move ahead with the road show.

Some Congress supporters alleged that the local BJP candidate PC Mohan, who had won Bangalore Central seat by over one lakh vote in 2014, was feeling nervous. “What you just saw was the result of their frustration,” said one Congress supporter.

Congress has once again fielded Rizwan Arshad, who had polled more than four lakh votes five years ago here.