The BJP has fielded the Malegaon terror accused, Sadhvi Pragya Singh Thakur, as its Lok Sabha candidate against Digvijay Singh of the Congress from Bhopal. This was after Pragya formally joined the saffron party earlier on Wednesday.

After meeting former Madhya Pradesh Chief Minister and other senior BJP leader, Pragya, who was arrested and spent years in jail for her role in the 2008 Malegaon blasts, told reporters that she had officially joined the saffron party. 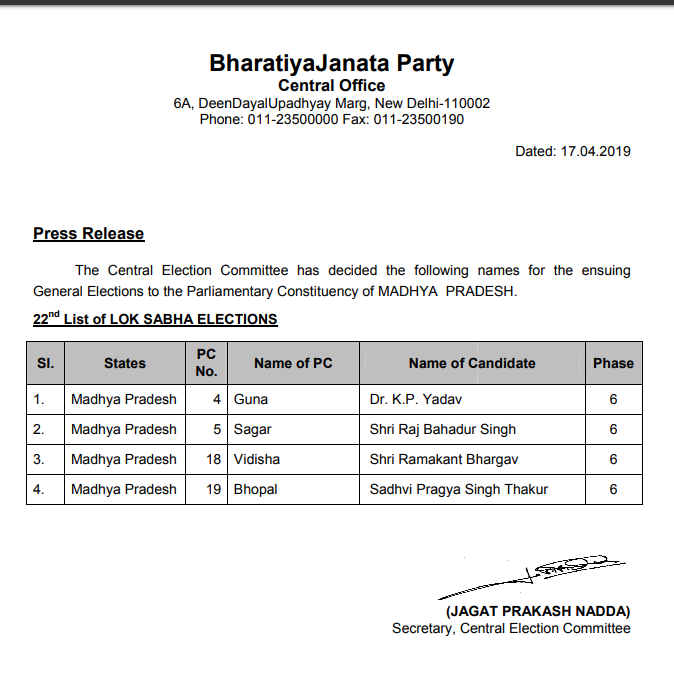 The announcement of Pragya Singh Thakur as its candidate by the BJP evoked strong reactions. Actress Swara Bhasker wrote on Twitter, “Latest addition to our scintillating list of MP contestants: a potential terrorist.. Malegaon blast accused Sadhvi Pragya.. BJP absolutely naked in its agenda of hate and divisiveness..”

Activist Shehla Rashid wrote, “BJP takes the fight against terror to another level!” One Twitter user H Jadhav wrote, “Now India lost right to oppose Hafiz Saeed to fight election in #Pakistan. Coz both are accused to spreading terror. If one is allowed why not other?” User Asghar RYP tweeted, “Blast accused Sadhvi Pragya contesting election with BJP ticket Her experience in handling Bombs might fetch her ministry of Defence, if BJP happens to win.”

Sadhvi Pragya and Lt Col Srikant Purohit had become the symbol of Hindu terror in India. However, since Narendra Modi assumed power at the Centre, the NIA was accused of having weakened the case against her and Purohit after it dropped the dreaded provisions of the Maharashtra Control of Organised Crime Act (MCOCA) against her. She is currently facing trial under the Unlawful Activities Prevention Act (UAPA).

Seven people were killed and over 100 injured in a bomb blast in Malegaon in September 2008.