Union Minister Narayan Rane has said that his posh Juhu bungalow was not constructed illegally after the Mumbai civic body served him a notice for inspection. 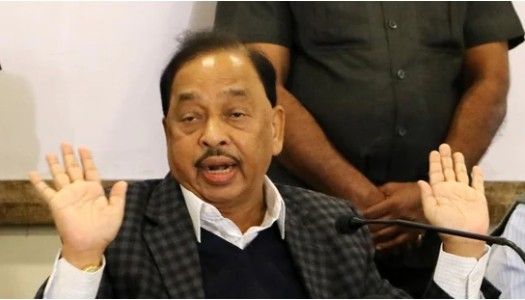 “Eight members of my family live here and no commercial activity takes place here. But Shiv Sena complains to BMC, they have BMC in their hands,” Rane was quoted as saying.

Rane said that he was in Delhi when he learnt about the BMC notice over my house. He said, “This house was completed by a famous architect on 17th Sept 2009 as per 1991 Development Control Regulations. Not even one inch of the building used for anything illegal.”

I was in Delhi y’day when I came to know that BMC has issued me a notice, over my house. This house was completed by a famous architect on 17th Sept 2009 as per 1991 Development Control Regulations. Not even one inch of building used for anything illegal: Union Min Narayan Rane pic.twitter.com/37g1DdtdYG

A report by Indian Express said that a notice from the K-West ward (Andheri west) was issued to the ‘owner/occupier’ on Thursday under section 488 of Mumbai Municipal Corporation (MMC) Act, 1888. The BMC had informed Rane that a team of K-west ward and Building Proposal department will visit to Adhish Bungalow at Juhu Tara Road on Friday to inspect his bungalow and verify the complaint of illegal constructions.

Rane was a Shiv Sena leader until he switched his loyalty and joined the Congress before becoming a BJP politician. He’s a cabinet colleague of Prime Minister Narendra Modi.