A senior Congress leader has reminded the people of Punjab how Rahul Gandhi predicted the ruins for the state in the wake of a win by the Aam Aadmi Party. This was after violent clashes between Sikhs and Hindus erupted in Patiala amidst chanting of pro-Khalistan slogans. 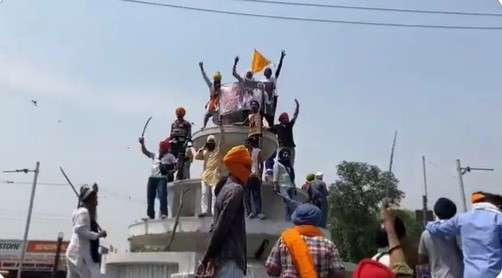 Sanjay Nirupam shared an old video of Rahul Gandhi from the latter’s campaign trail where he was seen warning people to not vote for the Arvind Kejriwal-led AAP. Gandhi was seen saying, “Mark my words. Those, who are promising to you by saying ‘give us a chance,’ will destroy Punjab. Punjab will burn. Mark my words.”

During the Punjab assembly polls, Kejriwal repeatedly asked voters of the state to give his party a channce.

Police on Friday imposed an overnight curfew in Patiala hours after the city witnessed violent clashes between Sikhs and Hindus. The police had to arrest Shiv Sena leader Harish Singla. The violent clash took place outside the Kali Mata temple when a group owing allegiance to Shiv Sena (Bal Thackeray) started an anti-Khalistan march. Things turned violent as rival groups wielded swords and pelted stones at each other.

These Hindutva virus will attack not only Muslims but also all the minorities of India.#KhalistanZindabad pic.twitter.com/oX8jyHVVTh

After Punjab Chief Minister Bhagwant Mann chaired a high-level meet, the news of Singla’s arrest came in. Mann later tweeted, “The incident of clashes in Patiala are deeply unfortunate. I spoke with the DGP, peace has been restored in the area. We are closely monitoring the situation and will not let anyone create disturbance in the State. Punjab’s peace and harmony is of utmost importance.”

Reacting to the violence, Rahul Gandhi tweeted, “Visuals from Patiala are disturbing. I repeat, Peace & Harmony are most imperative in a sensitive border state like Punjab. This is not the place to carry out experiments. Earnestly appeal to the Punjab govt to ensure law and order is maintained.”

Surprisingly, AAP chief Arvind Kejriwal has not tweeted about the event, which has sent shockwaves across the country.