The situation in Chennai has become tense after a video of two men being caught transporting EVMs on their bikes went viral. In the video, two men were apprehended by a group of people for carrying several units of electronic ballot boxes on their scooters. The men in question are believed to be the employees of the Chennai Municipal Corporation. The incident took place in the Velachery area of Chennai on Tuesday. 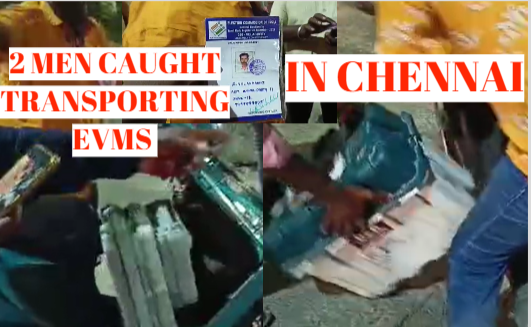 Assembly elections in Tamil Nadu were held on Tuesday in a single phase. Left red-faced, the office of the Chennai Corporation Commissioner released a statement saying that the voting machines featuring in the viral video were not used in Tuesday’s polls.

“These machines were not used in the polls. They were kept as reserve machines and should have been transported in the authorised vehicle. But it was transported in a two-wheeler and though it’s a reserve unpolled machine it’s a grave mistake and we are placing the entire team responsible under suspension forthwith,” the statement read.

According to The Hindu, the men were carrying the EVMs to the counting centre after the conclusion of the polling.

Both the men were reportedly handed over to the police even as the Election Commission reportedly ordered an inquiry.