A video of panic-stricken passengers on board SpiceJet Boeing B737 aircraft reciting verses from Holy Quran as turbulence hit the plane during its descent has gone viral on social media. 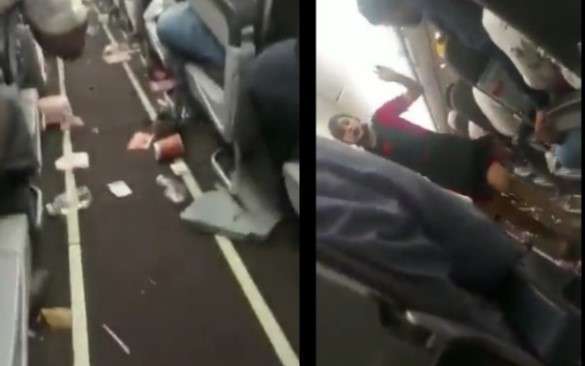 In the viral video shared on Twitter, desperate passengers could be heard reciting a verse from Holy Quran.

As many as 17 passengers are believed to have sustained injuries while the airline company has ordered a probe into the incident, which took place on Sunday. The plane had left Mumbai and was on its way to Durgapur in Bengal.

One passenger was heard saying, “The danger is far from over. Let’s recite La ilaha illa anta subhanaka innni kuntu menazzalemin.” This is a famous verse from Holy Quran (Verse 87, Surah Ambiya). The verse is often recited by Muslims when faced with danger.

In a statement, the airline watchdog DGCA said that it was ‘deputing teams for regulatory investigation, while medical reports of the injured passengers are awaited.’

Scary visuals when you face-off with bad weather during your flight. @flyspicejet encounters severe turbulence while landing at Durgapur airport. Dozens of passengers injured. Mumbai – Durgapur on May 1. #AvGeek pic.twitter.com/ibGsrlkS7b

SpiceJet, according to NDTV, also issued a statement, which read, “On May 1, SpiceJet Boeing B737 aircraft operating flight SG-945 from Mumbai to Durgapur encountered severe turbulence during descent which unfortunately resulted in injuries to a few passengers. Immediate medical assistance was provided upon the aircraft’s arrival in Durgapur.”