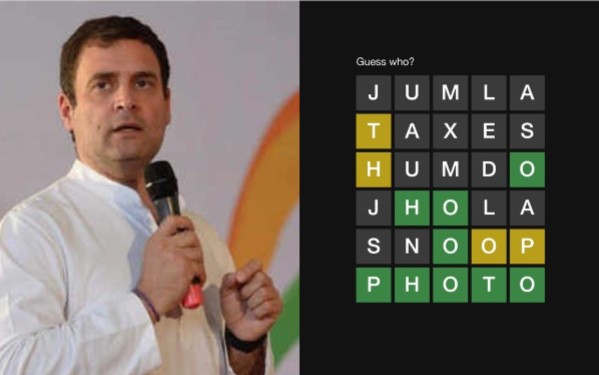 Sharing his own version of the viral brainteaser, Gandhi wrote, “Wordle 056 6/6.”

Modi’s detractors have often mocked him for often uttering jumlas in a bid to highlight his failed promises. Modi had promised to transfer Rs. 15 lakh to every India’s bank accounts in 2014 if he became the prime minister.

However, when he began to face criticism for not fulfilling his promise even after becoming the prime minister in 2014, Modi’s confidante, Amit Shah, had explained that the promise of Rs. 15 lakh was a mere jumla (empty promise).

Gandhi’s use of ‘TAXES’ appeared to be in reference to the Modi government’s constant policy of burdening the ordinary public with various taxes.

Gandhi has been attacking Modi with ‘Hum Do Hamare Do’ jibe saying that the currently government was run by two people, Modi and Shah’ and it served the interest of two businessmen, Mukesh Ambani and Gautam Adani.

Last year, Gandhi had attacked the Centre’s Narendra Modi government in the parliament, accusing it of favouring two businessmen with a Hum Do Hamare Do slogan. Much to the embarrassment of the BJP, its parliamentarians had immediately concluded that Rahul Gandhi was referring to Mukesh Ambani of Reliance Industries and Gautam Adani of the Adani Group.

The ‘JHOLA’ was in reference to Modi’s many public utterances claiming to be a hermit, who would pick up his jhola (bag) and reject power at any point.

The ‘SNOOP’ jibe was to embarrass Modi and Amit Shah for their alleged role in snooping on a woman during Modi’s term as the chief minister of Gujarat. Both Modi and Shah have also come under attack for allegedly snooping on the phones of journalists and other high-profile members of the civil society using Israeli spyware, pegasus.

And finally, the ‘PHOTO’ reference was to highlight Modi’s obsession with the camera.