Samajwadi Party leader Akhilesh Yadav on Thursday stunned a Republic TV employee by asking him if Arnab Goswami was in jail. Akhilesh made the comments about the Republic TV founder during a LIVE interview broadcast on Republic Bharat. As expected, Republic TV has deleted the embarrassing portion from the video on its YouTube channel and Facebook page. 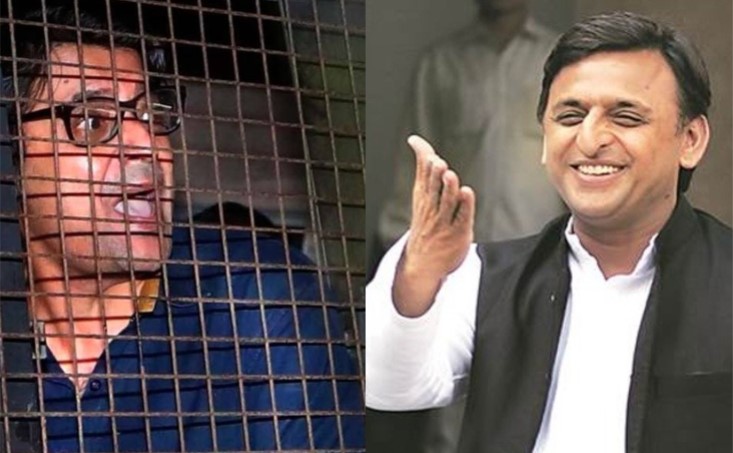 Republic TV on Thursday made a huge deal of its interview with Akhilesh Yadav, who’s seeking to return to power in Uttar Pradesh by dislodging the Yogi Adityanath government. The content of Yadav’s interview dominated the coverage on Republic TV and Goswami’s colleagues even held a prime time TV debate based on the Samajwadi Party chief’s videos.

However, eagle-eyed Twitterati pointed out how Yadav had heaped embarrassment on the Republic TV founder by asking his colleague if the controversial anchor was in jail. This was after the Republic TV employee thanked Yadav for his time and sought an assurance that he would make himself available for an interview with Arnab Goswami on the day of the results.

The Republic TV employee told the Samajwadi Party leader, “You were LIVE on Republic Bharat, Republic Media Network for so long. Thanks a lot. You have promised that, regardless of the outcome, you would speak to Arnab Goswami the day results are declared.”

Not expecting such comments his channel’s founder, a visibly shaken Republic TV employee said, “Akhilesh ji? Will you stop joking at some point? You’ve known him for so long.”

The Samajwadi Party leader replied, “I’ve known him for so long, since his days in NDTV.”

Although the embarrassing portion about Goswami was broadcast LIVE on Republic TV, the TV channel appears to have removed it from its YouTube channel and Facebook page.

Republic Tv : On 10th March, you have to give intervie to Arnab Goswami.

Republic Bharat : Will you give interview to Arnab Goswami after 10th March.

Watch this video and Thank me after this pic.twitter.com/etfUPsK5Vw

Goswami has been absent from his TV shows for many days. The Republic TV founder had to spend a week inside a Mumbai jail in November 2020 for his alleged role in abetting the suicide of an interior designer.