Former Punjab Congress chief Navjot Singh Sidhu has once again embarrassed his own party by showering praises on AAP chief minister, Bhagwant Mann, days after Sonia Gandhi sacked him from his post. 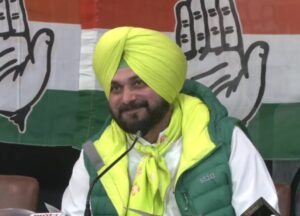 Sidhu tweeted, “The happiest man is the one from whom no one expects … Bhagwant Mann unfurls a new anti – Mafia era in Punjab with a mountain of expectations …hope he rises to the occasion , brings back Punjab on the revival path with pro – people policies … best always.”

Sidhu’s praise for Mann came after the Punjab chief minister announced a new helpline number to fight corruption in the state.

Mann tweeted, “On the martyrdom day of Bhagat Singh ji, we will release the anti-corruption helpline number. That will be my personal WhatsApp number. If anyone asks you for a bribe, send it to me by recording a video/audio of it. Strict action will be taken against the corrupt. Corruption will no longer work in Punjab.”

The AAP registered a historic mandate in the just-concluded assembly polls by winning 92 out of 117 seats. The Congress’ tally was reduced to just 18. Reacting to the AAP’s landlside victory, Sidhu on Friday had said that people in Punjab had made an excellent decision by giving a historic landslide in favour of Arvind Kejriwal’s Aam Aadmi Party.

“Punjab’s development is my objective. I’ve never deviated and will not deviate from that objective. A true yogi is free from every bond….This is the politics of change. I congratulate the people of Punjab for taking an excellent decision to change the traditional system. They have laid a new foundation (in politics),” Sidhu had said.