The Congress leadership has managed to prevent imminent danger to its government in Rajasthan after Rahul Gandhi met the rebel leader Sachin Pilot at his house in Tuglaq Lane on Monday. The Congress said in a statement that both Gandhi and Pilot ‘had a frank, open and conclusive discussion,’ adding that Pilot has ‘committed to working in the interest of the Congress party and the Congress government in Rajasthan.’ Elsewhere, Captain Deepak Sathe has been accorded a state funeral in Maharashtra. 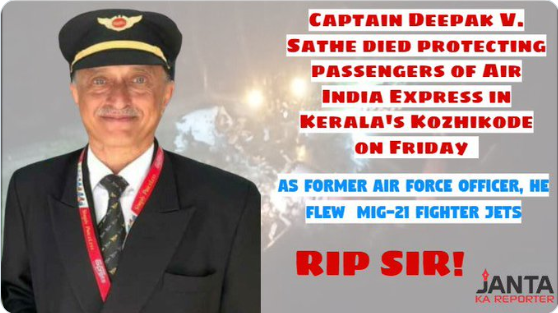 Pilot, for his part, said that there were some issues that needed to be highlighted. “I did that. I’d been saying since the beginning that all these things were based on principle. I always thought these things are essential to be raised in the party’s interest,” he was quoted as saying.

Elsewhere, former President Pranab Mukherjee has reportedly been kept on a ventilator after undergoing brain surgery to remove a clot. He’s also tested positive for COVID-19.

17:46 PM: The #Hyderabad police has removed a controversial banner with provocative writing from a busy traffic intersection in the city after its display went viral on social media. The banner was put up by an organization called Bhagat Singh Yuva Sena at Moazzam Jahi Market crossroads. (IANS)

17:12 PM: #Hajipur: Amid the twin problems of tackling #floods and the #coronavirus, the #Bihar government has launched a unique initiative – #COVID boat ambulance in its fight against the deadly virus. (IANS)

15:35 PM: The Bharatiya Janata Party (#BJP) has nominated Jai Prakash Nishad as its candidate for the #RajyaSabha seat that will be going to polls on August 24. The seat fell vacant following the demise of Samajwadi Party MP Beni Prasad Verma. (IANS)

14:57 PM: BJP MP Sakshi Maharaj gives written complaint to police claiming he has received calls from some terrorist organisation of Pakistan threatening to kill him in bomb blast. (PTI)

13:58 PM: A 60-year-old female #coronavirus patient died in an ambulance outside a private hospital in #Kolkata while allegedly awaiting admission as her family failed to deposit in time Rs 3 lakh demanded by the staff. (IANS)

12:46 PM: #Rajasthan CM Ashok Gehlot: If any MLA is annoyed with me, then it is my responsibility to address that. I have kept doing this in past and will do this now as well. (PTI)

12:12 PM: The Centre on Tuesday informed the #SupremeCourt that the special committee constituted to examine restoration of 4G services in #JammuandKashmir has agreed to provide the high speed #Internet access on a trial basis in limited areas. (IANS)

11:32 AM: Necessary to implement MGNREGA, NYAY to help those suffering due to unemployment in cities and the poor across country; will be beneficial for economy: Congress leader Rahul Gandhi. (PTI)

10:58 AM: Former #BJP district chief Sanjay Khokhar was shot dead at his farm in #Baghpat when he went out for a morning walk on Tuesday. The incident took place in Chaprauli area of the #UttarPradesh district. (IANS)

10:36 AM: A teenager student of Babson College in #Massachusetts, US, was killed in a road accident in Uttar Pradesh. The victim, Sudeeksha Bhaati, was in India for vacations & was supposed to return to the US on August 20. The 19-year-old was on her way to Bulandshahr on a two-wheeler. (IANS)

09:01 AM: Maharashtra govt to accord state funeral to Captain Deepak Sathe, pilot-in-command of Air India Express plane that crashed in #Kozhikode in Kerala (PTI).